AC Milan vs Bologna Live Streaming Online & Match Time in IST: How to Get Free Live Telecast of Serie a 2020–21 on TV & Football Score Updates in India? 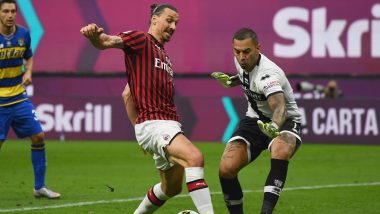 AC Milan will begin their Serie A 2020-21 campaign against Bologna on September 22 (Tuesday). AC Milan finished sixth in the league last season but will be hoping to finish in the top four or clinch a surprise Serie A win this season. While Milan will be playing their first Serie A 2020-21 match, they have already started the season with a 2-0 win over Shamrock Rovers in the Europa League qualifiers. Bologna will be playing their first match of the season. Meanwhile, fans searching for the live telecast and live streaming online and live score updates for AC Milan vs Bologna match should scroll down for all details, including online streaming on SonyLiv. Cristiano Ronaldo Scores Goal For Straight 19th Season During Juventus vs Sampdoria, Serie A 2020-21, Leads Team to 3-0 Win (Watch Goal Highlights).

Milan will be without Rafael Leao, Andrea Conti and Alessio Romagnoli for the Bologna match through injury, while Mateo Musacchio is out until next month with an ankle issue. Zlatan Ibrahimovic, who started the season with a goal against Shamrock Rovers, is expected to start against Bologna. Gary Medel is suspended for this match for Bologna. Neymar Jr Surpasses Cristiano Ronaldo and Lionel Messi in Terms of Earning After Signing On With Puma.

When is AC Milan vs Bologna, Serie A 2020-21 Football Match? Know Date, Time and Venue

AC Milan vs Bologna match will take place on September 22, 2020 (Monday midnight). The match will be played at the San Siro Stadium and is scheduled to start at 12:15 am IST (Indian Standard Time).

Where to Watch Live Telecast of AC Milan vs Bologna, Serie A 2020-21 Football Match?

Live Telecast of AC Milan vs Bologna Serie A 2020-21 match will be available on Sony Sports channels. Sony Pictures Sports Network (SPSN) is the official broadcaster for IPL 2020 in India. Fans can tune into Sony Ten 2 and Sony Ten 2 HD channels to watch the match live.

How to Get Free Live Streaming Online of AC Milan vs Bologna, Serie A 2020-21 Football Match?

Fans can also catch the match live on online platforms. SonyLiv, the OTT of Sony Network, will be live streaming the match for its online fans in India.

(The above story first appeared on LatestLY on Sep 21, 2020 10:52 PM IST. For more news and updates on politics, world, sports, entertainment and lifestyle, log on to our website latestly.com).