AC Milan, who have just one to their name in the Champions League this season, would aim to beat Liverpool and hope that Atletico Madrid gets the better of Porto, or draw with them in the other Group B game. Liverpool had beaten AC Milan 3-2 the last time these two sides faced each other earlier this year. 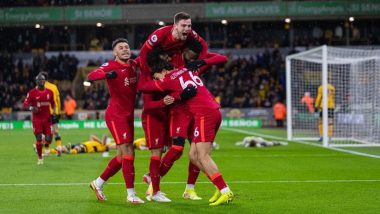 AC Milan are all set to lock horns with Liverpool in a Group B clash in the UEFA Champions League 2021-22 on Wednesday, December 8. The match would begin at 1:30 AM IST (Indian Standard Time). Liverpool have been more than a potent force to reckon with, sitting pretty at the top of the points table in Group B with 15 points and are through to the last 16. They have had an undefeated streak in the Champions League this season and Jurgen Klopp would be keen on maintaining that winning run as his team are set to play their final group game in the European competition before heading over to the knockouts. They might have some changes in their squad with Divock Origi, who scored the winner against Wolves in the Premier League, reportedly set to find a spot in the starting XI. Real Madrid vs Inter Milan, UEFA Champions League 2021-22 Live Streaming Online: Get Free Live Telecast of UCL Football Match in IST

AC Milan on the other hand, have had a forgettable Champions League campaign on their return to the competition and have won only one match so far. The only way they can make it to the last 16 is by beating Liverpool and hoping for Porto to lose to Atletico Madrid or draw against them.

The AC Milan vs Liverpool clash in UEFA Champions League 2021-22 will be played at San Siro in Milan on December 8, 2021 (Wednesday). The game has a scheduled time of 1:30 AM IST (Indian Standard Time).

Where To Watch Live Telecast of AC Milan vs Liverpool, UEFA Champions League 2021-22 Match on TV?

Sony Pictures Network are the official broadcasters of UEFA Champions League 2021-22 in India and will telecast the games live on its channels. Fans can tune into Sony Sports HD/SD channels to watch the live telecast of AC Milan vs Liverpool on TV.

Sony Pictures Network’s official OTT platform Sony LIV will be streaming the game live for its fans in India. You can tune into the Sony Liv app or website to watch AC Milan vs Liverpool, UEFA Champions League 2021-22 live streaming online. JioTV would also provide live streaming for this match.

(The above story first appeared on LatestLY on Dec 07, 2021 05:03 PM IST. For more news and updates on politics, world, sports, entertainment and lifestyle, log on to our website latestly.com).