Argentina vs Uruguay, Copa America 2021 Live Streaming Online & Match Time in IST: How to Get Live Telecast of ARG vs URU on TV & Free Football Score Updates in India

Argentina vs Uruguay, Copa America 2021 clash will take place late on June 19, 2021 (Saturday morning) at the Estadio Nacional de Brasilia. The Copa America 2021 match in Group B has a scheduled time of 05:30 am IST (Indian Standard Time). 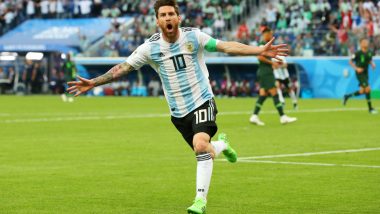 Argentina and Uruguay will be looking for the first win in the 2021 edition of the CONMEBOL Copa America after disappointing draws in their opener. The La Albiceleste under manager Lionel Sacaloni have proved a hard nut to crack with their last defeat coming way back in 2019. But lack of win in their last three matches is a cause of worry. Opponents Uruguay are not having the best of time on the pitch recently as well which makes this battle a fascinating one. The two teams were involved in a 2-2 battle in their previous meeting. Copa America 2021 Points Table Updated: Brazil Maintain Perfect Record, Colombia Move To Second In Group A.

Nicolas Gonzalez will undergo a late fitness test to determine his availability for the match. Lionel Messi, who scored a wonderful free kick against Chile, should start on the right wing with Lautaro Martinez playing down the middle. Giovani Los Celso and Rodrigo De Paul are dynamic midfielders and can trouble Uruguay with their foray in the attacking third. Nicolas Otamendi should partner with Christian Romero at the back.

Edinson Cavani returns to the national team fold after serving his two game suspension and that should see the resumption of Luis Suarez and Edinson Cavani partnership. Real Madrid’s Federico Valverde is the talisman in their midfield, where he will be able supported by Lucas Torreira. Diego Godin will continue to be the leader at the back for the team despite turning 35 in February. Ronald Araujo has also been called up to the team but will likely start the match on the bench. Copa America 2021 Schedule in IST, Free PDF Download Online: Get Fixtures, Time Table With Match Timings and Venue Details of CONMEBOL.

When is Argentina vs Uruguay, Copa America 2021 Match? Date, Time and Venue Details

Argentina vs Uruguay, Copa America 2021 clash will take place late on June 19, 2021 (Saturday morning) at the Estadio Nacional de Brasilia. The Copa America 2021 match in Group B has a scheduled time of 05:30 am IST (Indian Standard Time).

Sony Pictures Networks India is the official broadcaster of UEFA EURO 2020 in India. It will broadcast Argentina vs Uruguay, Copa America 2021 live match on the Sony Sports channels and Sony Ten 2 will telecast the game on TV.

The live online streaming of Argentina vs Uruguay, Copa America 2021 football match will be available on the SonyLiv app and website. Jio will also provide the live streaming for its users on Jio TV app. FanCode will also live stream Argentina vs Uruguay game but fans need to pay a nominal fee to watch the game. Uruguay play their first game in the competition and will be desperate for a bright start. The game is likely going to end in a scored draw.

(The above story first appeared on LatestLY on Jun 18, 2021 08:34 PM IST. For more news and updates on politics, world, sports, entertainment and lifestyle, log on to our website latestly.com).