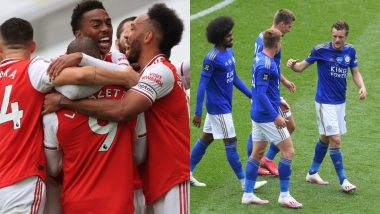 Arsenal vs Leicester City, Premier League 2019-20 Live Telecast and Free Live Streaming Online: Arsenal will hope to extend their four-match winning streak across all competitions when they host a third-placed Leicester City in Premier League 2019-20 on Tuesday midnight. Arsenal, who began project restart with defeats against Manchester City and Brighton, have successfully turned their campaign back on track with three straight league wins and also a FA Cup quarter-final victory over Sheffield United. Leicester began with a goalless draw and have suffered defeats to Chelsea (FA Cup) and Everton before beating Crystal Palace in their previous game. Forward Gabriel Martinelli Signs New Long-Term Deal With Arsenal.

Both Leicester and Arsenal are chasing European berths but while Leicester are almost assured of a Champions League place, Mikel Arteta’s Arsenal see Europa League as a realistic option. Arsenal, however, still have an outside chance of finishing in the fifth position, which may well be enough for a Champions League berth if Man City’s Europe ban is upheld. Bukayo Saka Signs Long-Term Deal With Arsenal.

Arsenal are currently placed seventh in the Premier League points table with 49 points from 33 matches and are six far from Manchester United, who are on fifth. Leicester from the same number of games have 57 points and are third.

Arsenal vs Leicester City match in Premier League 2019-20 will be played at the Emirates Stadium. The match will take place on July 08, 2020 (Tuesday midnight) and is scheduled to begin at 12:45 am IST (Indian Standard Time).

How to Get Free Live Streaming Online of Arsenal vs Leicester City, Premier League 2019-20 Football Match?

Fans can also catch the live streaming of Arsenal vs Leicester City match on online platforms. Hotstar, the OTT of Star Network, will be live streaming the Premier League clash online for its fans in India.

Leicester City have won three of their last four league meetings against Arsenal and are also aiming to record three successive league wins against the Gunners for the first time since 1963. But Arsenal are unbeaten at home against Leicester in their last 22 matches and have beaten the Foxes at the Emirates in each of their last 12 Premier League meetings.

(The above story first appeared on LatestLY on Jul 07, 2020 05:32 PM IST. For more news and updates on politics, world, sports, entertainment and lifestyle, log on to our website latestly.com).