Three losses in four games did derail Arsenal's campaign but Mikel Arteta would believe his side can pick themselves up again and start winning games. They face Southampton, who are 16th on the points table and are six points away from the relegation zone. 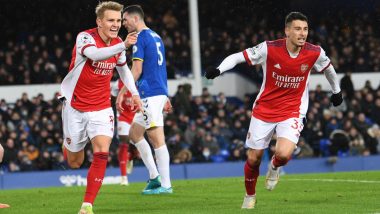 Arsenal would take on Southampton in a Premier League 2021-22 clash at the Emirates Stadium on Saturday, December 11. The match would be played at the Emirates Stadium and is scheduled to start at 8:30 pm IST (Indian Standard Time). The Gunners were going well in the Premier League up until they lost to Liverpool. Two more defeats followed in no time (one of them to Everton, who are in poor form) and now, they find themselves to be locked in tough competition with Manchester United and city rivals Tottenham Hotspur for the fifth spot. A win for Arsenal could put them in a good position to return to the fifth spot and increase pressure on the top four and the Gunners need to maximise their available opportunities. They face Southampton, a side who are down on form and confidence, placed 16th on the table. Norwich City vs Manchester United, Premier League 2021-22 Free Live Streaming Online & Match Time in India: How To Watch EPL Match Live Telecast on TV & Football Score Updates in IST?

The Saints have not won in their last three Premier League fixtures and although they might spring up a surprise against Arsenal, the chances of that happening at the Emirates is highly unlikely. Let us take a look at the live streaming details of the match below.

The Arsenal vs Southampton Premier League 2021-22 match will be played at the Emirates Stadium in London. The game will be held on December 11, 2021 (Saturday) and is scheduled to begin at 8:30 pm IST (Indian Standard Time).

Where to Get Live Telecast of Arsenal vs Southampton, Premier League 2021-22 Football Match?

Fans in India can watch the Arsenal vs Southampton match live on Star Sports channels since Star Network is the official broadcaster for the Premier League 2020-21 in India. Fans can tune into Star Sports Select SD/HD and Star Sports Select 1 HD channels to live telecast the clash. Cristiano Ronaldo and Pele Engage With Each Other on Instagram After Brazilian Legend Shares Health Update From Hospital

How to Get Free Live Streaming of Arsenal vs Southampton, Premier League 2021-22 Football Match?

The game will also be available online for live streaming. As Star Network is the official broadcaster for Premier League in India, fans can watch the live streaming of the Arsenal vs Southampton match on Disney+Hotstar.

(The above story first appeared on LatestLY on Dec 11, 2021 05:23 PM IST. For more news and updates on politics, world, sports, entertainment and lifestyle, log on to our website latestly.com).