Both sides need a win to keep themselves alive in the race for making it to the last 16 stage. Atletico Madrid had won 2-1 the last time these two teams met in the Champions League this season. 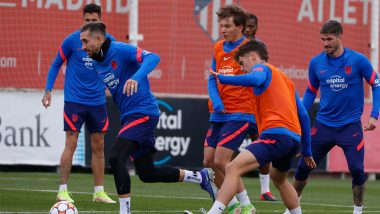 Atletico Madrid are set to go up against AC Milan in a crucial UEFA Champions League 2021-22 encounter at the Wanda Metropolitano on November 25, Thursday. The match would begin at 1:30 am IST (Indian Standard Time). Diego Simeone would expect his side to perform and win this game, which would put them in the second spot in Group B should Porto lose to Liverpool in the other match. Atletico Madrid needed to beat Liverpool to get closer to a last 16 spot but a trip to Anfield is always difficult, with the Reds claiming victory and staying and making it through to the next stage. Simeone's team, who were La Liga champions last year, have had a season of mixed performances so far and it is now on them to step up and give their best in what would be a very important tie. AC Milan, who are surprisingly yet to win a match in the Champions League this season, can still keep their last 16 hopes alive if they win against Atletico Madrid. Karim Benzema, France and Real Madrid Star, Given Suspended Prison Sentence in Sex-Tape Trial

A victory for Stefano Pioli's side would give them the same number of points as Atletico and things could get really interesting on the final matchday with just one spot left from this group. Simeone's side would be without right-back Kieran Trippier and Joao Felix as they are out with injuries while AC Milan would be missing the services of Fikayo Tomori, Ante Rebic and Mike Maignan among others. Pioli would be wary of his side's tendency to concede late goals, which has been a cause of concern for the Rossoneri this season.

The Atletico Madrid vs AC Milan clash in UEFA Champions League 2021-22 will be played at the Wanda Metropolitano on November 25, 2021 (Thursday). The game has a scheduled time of 1:30 am IST (Indian Standard Time).

Sony Pictures Network are the official broadcasters of UEFA Champions League 2021-22 in India and will telecast the games live on its channels. Fans can tune into Sony Sports HD/SD channels to watch the live telecast of Atletico Madrid vs AC Milan on TV.

Sony Pictures Network’s official OTT platform Sony LIV will be streaming the game live for its fans in India. You can tune into the Sony Liv app or website to watch Atletico Madrid vs AC Milan, UEFA Champions League 2021-22 live streaming online. JioTV would also provide live streaming for this match.

(The above story first appeared on LatestLY on Nov 24, 2021 06:54 PM IST. For more news and updates on politics, world, sports, entertainment and lifestyle, log on to our website latestly.com).