Ballon d'Or 2021 Ceremony Time, Live Streaming and Telecast: When and Where To Watch 65th Ballon d'Or Award Ceremony in India, US, UK, France and Other Countries Online

Lionel Messi would be eyeing a record seventh Ballon d'Or title this year with Poland striker Robert Lewandowski closely following him in the race. Take a look at this article to get live streaming and telecast details of the event in UK, USA, Australia, Bangladesh, Sri Lanka, Italy, France, Spain, Brazil, Poland and Argentina. 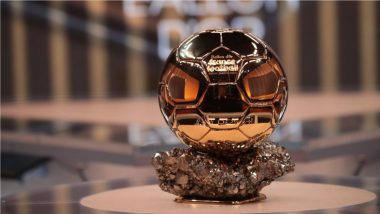 It is time for the Ballon d'Or awards and like every year (barring 2020), there is a lot of excitement and buzz about who is going to be the potential winner this time around. Lionel Messi and Robert Lewandowski are said to be the front runners this time for the top prize with several reports claiming that the Argentine is set to get his hands on the coveted trophy for a record seventh time. For the record, Messi had won this award back in 2019 as well and Lewandowski was a hot favourite to clinch it in 2020 but the awards were called off owing to the COVID-19 pandemic. In this article, we shall have a look at the live telecast and streaming details of the event in the UK, USA, Australia, Bangladesh, Sri Lanka, Italy, France, Spain, Brazil, Poland and Argentina. Ballon d'Or 2021 Ceremony: Date, Time in IST, Nominees, Online Streaming, TV Telecast in India and More To Know About France Football's Yearly Awards.

After an exciting year of football, the stars of the sport would be rewarded in what is recognized widely as one of the most prestigious awards in the world.  Take a look at the table below to get live streaming and telecast details of the event.

As we can see in the table above, L'Equipe, which is a French football daily, would reportedly provide the live streaming of this event on its YouTube channel worldwide. So football fans can head to their YouTube channel to watch live streaming of the awards ceremony. Along with this, there would be a Women's Ballon d'Or trophy, the Koka trophy (presented to the best young player) and also the Yashin Trophy, awarded for being the best goalkeeper.

While many across the world have tipped Messi to win the title, his competition with Poland and Bayern Munich striker Lewandowski and Italy and Chelsea midfielder Jorginho is something that fans would look forward to. A seventh Ballon'D'or title would increase Messi's lead over Cristiano Ronaldo, who would then have two trophies less.

(The above story first appeared on LatestLY on Nov 29, 2021 03:20 PM IST. For more news and updates on politics, world, sports, entertainment and lifestyle, log on to our website latestly.com).