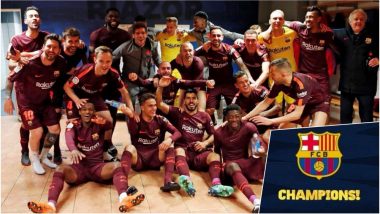 Madrid, April 30: A hat-trick by Lionel Messi has earned Barcelona a 4-2 victory over Deportivo, crowning the Catalans as the La Liga 2017-2018 champions just a week after winning Spain's Copa del Rey. Galicia's Riazon stadium in Spain's A Coruna city on Sunday saw the defeat of the locals, who needed a win to avoid relegation to Spain's Second Division next season, Efe news reported.

Just seven minutes into the match, Barca's Philippe Coutinho scored the game's first goal, which Deportivo's Lucas Perez then matched only to have the second tally annulled due to an offside by Schar. Messi claimed Barca's second goal at minute 38 and in response, it was Perez again to vindicated himself for the lost goal five minutes before halftime, and then after play resumed the home squad's Turkish midfielder Emre Colak leveled the score in the 64th minute.

Just as Deportivo was beginning to see a glimmer of hope, Argentina's maestro Messi scored two more bang-bang goals a mere three minutes apart, at minutes 82 and 85. Sunday's triumph marked the 25th La Liga championship win in Barcelona's team history and was the Catalan team's seventh league title in the past 10 seasons. It was also the Catalan club's 34th consecutive win in Spanish league play.

(The above story first appeared on LatestLY on Apr 30, 2018 11:48 AM IST. For more news and updates on politics, world, sports, entertainment and lifestyle, log on to our website latestly.com).