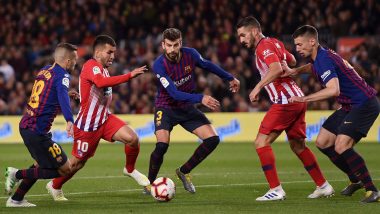 Football fans must brace themselves as Barcelona are set to host Atletico Madrid in their latest fixture in La Liga 2019-20. The match will be played on Wednesday (July 1) at Camp Nou in Barcelona. Stakes are quite high in the encounter as a victory will advance Lionel Messi and Co at the pinnacle of the points table while Madrid will aim to stop them from doing so. Quique Setien’s Men bagged a lot of criticism after their last match against Celta Vigo ended in 2-2 draw while Atletico have won their last three encounters. As the high-voltage match is set on the cards, below, we’ll revisit the results of the last five Barcelona vs Atletico Madrid clash. Barcelona vs Atletico Madrid, La Liga 2019-20: Check Out Predicted Line-Ups For BAR vs ATL at Camp Nou.

Talking about the head to head results between the sides, the two clubs have locked horns in 51 matches so far. Blaugranas came on top 27 times while Atletico Madrid tasted victory on 11 occasions. 13 matches ended in a draw. Well, the home team will get confidence for this record and they will like to add another victory in their cabinet while Atletico must leave no stones unturned to get the result in their favour. Meanwhile, let’s look at how the two teams fared in their last five encounters. Barcelona vs Atletico Madrid, La Liga 2019-20: Lionel Messi, Alvaro Morata and Other Players to Watch Out in BAR vs ATL Football Match.

In the previous meeting between the two sides earlier this year, Madrid got the better of Barcelona in the semi-finals of Supercup 2019-20. Antoine Griezmann and Lionel Messi struck the nets for Barcelona. However, Koke, Angel Correa and Alvaro Morata put up a brilliant show and guided Madrid over the line.

Football fans witnessed a brilliant contest when these two sides last locked horns in the ongoing La Liga season. No goals were scored in the first 85 minutes of the game and extra time was on the cards. However, Messi registered a brilliant goal in the 86th minute and guided his side to victory.

Another Lionel Messi special was witnessed when these two teams locked horns for the second time in La Liga 2018-19. The first half of the game ended with 0-0 on the board. However, Luis Suarez and Messi struck nets within the span of two minutes as Barcelona registered an easy win.

Another tight contest between the sides was witnessed during their first meeting in La Liga 2018-19. Diego Costa scored the first goal of the game in the 77th minute as Madrid looked all set to clinch the encounter. However, Ousmane Dembele struck the nets with just a few seconds left and the game ended in a draw.

This was the last meeting to the two great sides in La Liga 2017-18. Messi was looking at his prime as he registered a magnificent goal in the 26th minute of the game. However, no more goals were seen in the game as Blaugranas came on top by 1-0.

(The above story first appeared on LatestLY on Jun 30, 2020 05:32 PM IST. For more news and updates on politics, world, sports, entertainment and lifestyle, log on to our website latestly.com).