Barcelona vs Espanyol, La Liga 2019-20: Lionel Messi, Antoine Griezmann and Other Players to Watch Out in BAR vs ESL Football Match 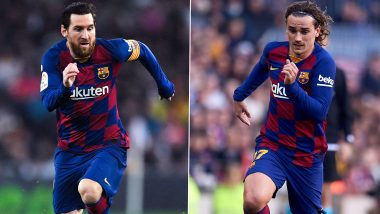 Barcelona will hope to cut down a four-point gap on top of the 2019-20 La Liga points table when they host local rivals Espanyol in Derbi Barceloni on Wednesday. Lionel Messi-led Barcelona shrugged off a disappointing 2-2 draw against Atletico Madrid with a confident boosting 4-1 win over Champions League aspirants Villarreal and will eye another such result in the Barcelona city derby.  A win will cut their four-point gap with Real Madrid to one with Los Blancos having a match in hand. Espanyol also will be desperate for a win as any other result will confirm their relegation to the second division. Barcelona Announces 23-Member Squad for Match Against Espanyol Amid Lionel Messi’s Transfer Rumours.

Espanyol, however, have lost their last five league games and are winless in their last six. They also haven’t won any of their last seven away league games and sit at the bottom of the La Liga points table with only 24 points. They are nine points adrift the safety zone with only four games remaining. Barcelona, on the other, have won just two games in their last five but are unbeaten in eight matches. As Barcelona and Espanyol face-off in a crucial La Liga encounter, take a look at some key players who can impact the result. Quique Setien to Remain in Charge of Barcelona Next Season, Says Josep Maria Bartomeu.

There is not a match where Lionel Messi in on the pitch and has not made any sort of impact. He couldn’t find the net against Villarreal but assisted both Luis Suarez and Antoine Griezmann taking his La Liga assists tally to 19 for the season, the most by any player this season.

Messi also leads the goalscoring charts with 22 strikes and is the favourite for a record seventh Pichichi trophy, awarded to La Liga’s highest goalscorer. He will be the key as Barcelona fights to cut down the four-point gap on Real Madrid and keep the pressure on Los Blancos.

Espanyol have found it difficult to find the net frequently this season with no player scoring more than four league goals. And that has kept them at the bottom of the 2019-20 La Liga points table. Only three players have managed to score four goals and one among those three is Chinese forward Wu Lei. The 28-year-old joined from Shanghai SIPG this season and although he has not been very productive, his goals have come handy for Espanyol.

Wu Lei, who made his debut in Chinese professional league at the age of 14 making the youngest ever to play in the league, will be eager to add to his strike against a big opponent.

The former Atletico Madrid-man came on only in the 90th minute and had to sit and watch his side play a disappointing 2-2 draw against his former club. But Grizmann started against Villarreal and scored with a sensational lob to put Barcelona 2-1 ahead.

His pressure and positioning was also crucial in his side getting the first goal, which was an own goal by Pau Torres. Griezmann looked a different player against Villarreal and was more confident, connected well with both Messi and Suarez and also created some fine openings.

At just 17-year-old, Fati has already scored five league goals for Barcelona despite starting most games from the bench. He came on as a substitute and scored within 15 minutes against Villarreal hitting the final nail in a 4-1 win.

He is not certain of a start just yet, but don’t be surprised if he influences the match yet again from the bench. He has shown he can be a super sub and coach Quique Setien will be delighted knowing he has a player on the bench that can impact the game.

(The above story first appeared on LatestLY on Jul 08, 2020 09:45 PM IST. For more news and updates on politics, world, sports, entertainment and lifestyle, log on to our website latestly.com).