Boxing Day 2020 Football Schedule: From Arsenal vs Chelsea to Leicester City vs Manchester United, List of Matches to Be Played on December 26 This Year

The first Boxing Day football match was played in 1860 between Sheffield United and Hallam FC. The tradition of Boxing Day top-flight football matches in England then became popular in the late 1980s and has been a tradition since 1989. Teams in the Premier League face their busiest schedule during the festive period. 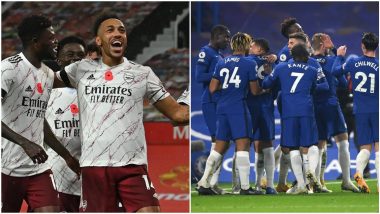 Unlike the other leagues across Europe, the English Premier League (EPL) gets busier during the Christmas-New Year festive season. When most leagues go on a week-long break, teams in the Premier League and in English football play at least four matches in a week’s time with matches coming thick and fast for all teams. It has been a long tradition in the United Kingdom to play football matches on Boxing Day and the custom is set to continue with as many as six matches set to be played in the EPL 2020-21 on Boxing Day. Here we take a look at the football matches schedule that will be played on December 26. Boxing Day 2020 Cricket Schedule: From India vs Australia 2nd Test to New Zealand vs Pakistan, List of Matches to Be Played on December 26 This Year.

The first Boxing Day football match was played in 1860 between Sheffield United and Hallam FC. The tradition of Boxing Day top-flight football matches in England then became popular in the late 1980s and has been a tradition since 1989. Teams in the Premier League face their busiest schedule during the festive period matches held within two days of one another. Take a look at the Boxing Day Premier League matches set to be played this year.

The West North London derby will be the biggest extravaganza in the Premier League on Boxing Day. Arsenal are struggling after five defeats in their last seven matches and are just four points clear of the relegation zone after 13 rounds. They will host Chelsea on Boxing Day at home where they have lost three of their last four matches. Arsenal have lost at home to Aston Villa, Wolves and Burnley and were held to a draw by Southampton. Their opponents Chelsea have dropped down to eighth in the table after consecutive defeats.

Leicester City will play Manchester United on Boxing Day. The Premier League match will be the first clash on Boxing Day and is scheduled to begin at 06:00 pm IST (Indian Standard Time). Both sides registered emphatic victories in the weekend and will be raring to repeat the performance on Boxing Day. United jumped to third in the points table after thrashing Leeds united 6-2 at home. Leicester City beat Tottenham Hotspur 2-0 at home.

Newcastle United will chase an upset win when they play Manchester City on Boxing Day. City are seventh in the league table but haven’t lost since the 2-0 loss to Tottenham Hotspur in late November. They play Arsenal in the League Cup quarter-final mid-week before facing Newcastle United in the league.

Crystal Palace will hope to bounce back from the 0-7 hammering they received against Liverpool when they play Aston Villa, who have played well but inconsistently, on the Boxing Day. In a mid-table clash, both sides will be chasing a victory. Aston Villa are unbeaten in their last three, which includes wins over Wolves and West Brom, while Crystal Palace are winless in their last three matches.

In a table-top vs bottom clash Everton will face Sheffield United on the Boxing Day and will be confident of a win. Everton are placed fourth in the Premier League table and are title-contenders while Sheffield United are at the bottom winless after 14 games. Everton will see this game a sure win and aim to catch Liverpool in the title race.

Southampton are playing for an unlikely European berth this season. They are placed sixth in the table and are ahead of Manchester City and Chelsea. Fulham, on the other, have just avoided dropping into the relegation zone with a draw against Newcastle United. Fulham have drawn each of their last three games while lost to City in their last fixture.

(The above story first appeared on LatestLY on Dec 21, 2020 03:51 PM IST. For more news and updates on politics, world, sports, entertainment and lifestyle, log on to our website latestly.com).