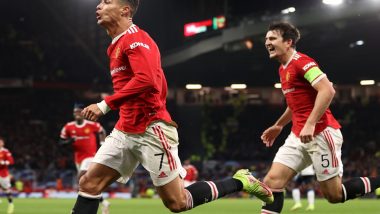 Manchester United will play their last game of the year later tonight against Burnley in the EPL 2021-22 match. Ralf Rangnick's men will be surely looking forward to shrugging off their draw against Newcastle that actually dented their chances for the top four. In this article, we shall be bringing to you the live streaming and online telecast details of the game. but before that, here's the preview of the game. So the match will begin at 01.45 am IST at Old Trafford. Manchester United to Miss Three Players for EPL 2021-22 Match Against Burnley, Cristiano Ronaldo Likely to be Benched.

The home team will be missing out on the services of their three key players from the first team. The Red Devils will be missing out on the services of Victor Lindelof who has been tested positive for COVID-19. He had even missed out on the game against Newcastle. Paul Pogba continues to be on the doctor's table with his thigh problem whereas. Bruno Fernandes had picked up a yellow card and thus has been suspended. Burnley will be travelling to Old Trafford without the services of Connor Roberts and Ashley Barne. The visiting squad does not have too many headaches when it comes to injuries. Now, let's have a look at the live streaming and online telecast details below.

The Manchester United vs Burnley Premier League 2021-22 match will be played at the Old Trafford in Manchester. The game will be held on December 31, 2021 (Friday) and is scheduled to begin at 1:45 am IST (Indian Standard Time).

Where to Get Live Telecast of Manchester United vs Burnley Premier League 2021-22 Football Match?

How to Get Free Live Streaming of Manchester United vs Burnley, Premier League 2021-22 Football Match?

The game will also be available online for live streaming. As Star Network is the official broadcaster for Premier League in India, fans can watch the live streaming of the Manchester United vs Burnley match on Disney+Hotstar.

(The above story first appeared on LatestLY on Dec 30, 2021 05:06 PM IST. For more news and updates on politics, world, sports, entertainment and lifestyle, log on to our website latestly.com).