Canada vs Morocco, FIFA World Cup 2022 Live Streaming & Match Time in IST: How to Watch Free Live Telecast of CAN vs MOR on TV & Free Online Stream Details of Football Match in India

The Canada vs Morocco FIFA World Cup 2022 match will be played at the Al Thumama Stadium. The game will be held on December 01, 2022 (Thursday) and is scheduled to begin at 08:30 pm IST (Indian Standard Time). 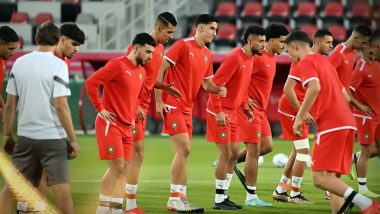 Canada will be playing for pride when they take on Morocco in the 2022 FIFA World Cup. Despite impressing with their brand of football in their opening two games, Canada have no points to show for. They have lost to Belgium and Croatia so far but will try to be the party spoiler for Morocco who have a I've massive chance of making it to the Round of 16. Morocco, who started off their campaign with a draw against Croatia grabbed headlines all over the world as they beat Belgium 2-0. It was an effort of enormous proportion from the Atlas Lions as Belgium is a team full of stars. But the team showed there is no substitution for grit and determination in football as they managed a massive upset. FIFA World Cup 2022 Schedule for Free PDF Download Online: Get Football Fixtures, Time Table With Match Timings in IST and Venue Details.

Canada does not have any injury concerns or suspension before their final game of the campaign. Steven Vitoria and Kamal Miller came in under heavy pressure against Croatia, but Morocco are a bit of a defensive side which will give them a breather. Alphonso Davies has been brilliant so far for Canada and he along with Tajon Buchanan will use their fiery pace to create some chances from the flanks.

Yassine Bounou is fit again for Morocco and in line to start against Canada. The two full backs in Achraf Hakimi and Noussair Mazraroui have been instrumental in both the halves for the side and Canada will be wary of the threat they carry. Hakim Ziyech is looking like the player that he was at Ajax and all eyes will be on him in the attacking third. FIFA World Cup 2022 Group F Points Table Updated Live: Croatia Jump to Top Spot, Morocco Second After Stunning Win Over Belgium.

The Canada vs Morocco FIFA World Cup 2022 match will be played at the Al Thumama Stadium. The game will be held on December 01, 2022 (Thursday) and is scheduled to begin at 08:30 pm IST (Indian Standard Time).

Where to Get Live Telecast of Canada vs Morocco, FIFA World Cup 2022 Match?

Sports 18 network holds the live broadcast rights of Football World Cup 2022 in India, So, fans in India can watch Canada vs Morocco (CAN vs MOR), FIFA World Cup 2022 match live on Sports 18 in English commentary. For Hindi commentary fans will have to tune into MTV and Sports 18 Khel.

How to Get Free Live Streaming of Canada vs Morocco, FIFA World Cup 2022 Match?

With Sports 18 holding the broadcast rights, the live streaming online of FIFA World Cup will be available on Jio Cinema mobile app and website. Fans can watch the live streaming of the Canada vs Morocco (CAN vs MOR), FIFA World Cup 2022 match on Jio Cinema for absolutely free. Live commentary of the match is available in English, Hindi, Malayalam, Bengali and Tamil. Morocco will not let go of this massive opportunity and should end up as 0-2 winners from this contest.

(The above story first appeared on LatestLY on Dec 01, 2022 01:12 PM IST. For more news and updates on politics, world, sports, entertainment and lifestyle, log on to our website latestly.com).