Cristiano Ronaldo Creates History With Goal Against Spezia, Adds Another Exclusive Record to His Name

Ronaldo scored 21 goals in his maiden season in Serie A and followed it with 31 goals last year when he finished second to Lazio’s Ciro Immobile. This season he has already found the net 20 times in Serie A and 27 goals in all competitions. Only Robert Lewandowski (28) has scored more goals than Ronaldo in Europe’s top five leagues this season. 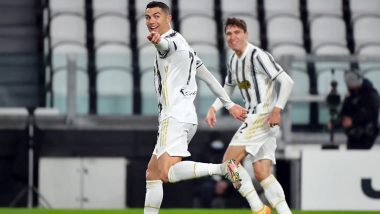 Cristiano Ronaldo added another milestone to his illustrious career after netting the third goal in Juventus’ 3-0 win over Spezia. The strike against Spezia was Ronaldo’s fourth goal in his last three Serie A appearances and took him two clear of Inter Milan’s Romelu Lukaku in the Serie A golden boot race. Ronaldo has now scored 20 goals in the Italian top-flight this season. The 36-year-old scored in the 89th minute to seal a comfortable 3-0 win for Juventus and take them three points behind second-placed AC Milan in the league points table. Juventus 3-0 Spezia, Serie A 2020-21 Goal Video Highlights: Cristiano Ronaldo Scores in Comfortable Win

With his goal against Spezia, Ronaldo became the first footballer to score at least 20 goals in 12 consecutive seasons in Europe’s top five leagues. The last time Ronaldo failed to score 20 goals in a top-flight league was during his final season at Manchester United in 2008-09. Since then, the Portuguese superstar has played nine seasons for Real Madrid and three at Juventus and scored 20  league goals or more in each of those 12 seasons. Ronaldo is in his third season at Turin and already the favourite to win the Capocannoniere – awarded to the highest goalscorer in the Serie A each season.  Cristiano Ronaldo Transfer News Update: Juventus Star Linked With a Move to David Beckham’s MLS Club Inter Miami.

He scored 21 goals in his maiden season in Serie A in 2018 and followed it with 31 goals last year when he finished second to Lazio’s Ciro Immobile in the Serie A golden boot race. This season he has already found the net 20 times in Serie A and 27 goals in all competitions. Only Robert Lewandowski (28) has scored more goals than Ronaldo in Europe’s top five leagues this season.

Juventus, meanwhile, returned to winning ways after being held to a 1-1 draw at Verona in their last Serie A match. Alvaro Morata and Federico Chiesa scored the other two goals for Juventus in the 3-0 win over Spezia. Morata opened the scoring in the 62nd minute just 60 seconds after coming on as a substitute. He struck home at the near post to put Juventus 1-0 ahead when another substitute Federico Bernardeschi found him with a low cross. Bernardeschi was in action again nine minutes later and this time he found Chiesa after once again cutting-in from the right.

Chiesa's first shot was saved but he scored from the rebound from the ground before Ronaldo sealed the win with a goal in the penultimate minute of regulation time. Ronaldo was teed up by Rodrigo Bentancur from a Juventus counter-attack. The win took Juventus to 49 points from 24 games, three behind AC Milan and six from leaders Inter.

(The above story first appeared on LatestLY on Mar 03, 2021 10:37 AM IST. For more news and updates on politics, world, sports, entertainment and lifestyle, log on to our website latestly.com).