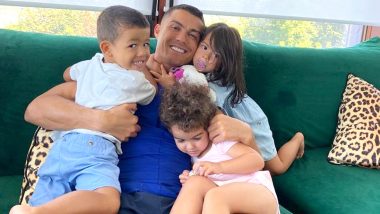 Cristiano Ronaldo is making of his time at home before returning to action with Juventus on Friday. Ronaldo, who played an instrumental role in helping Juventus to a record ninth successive Serie A title, returned from a short vacation with his girlfriend in Portofino and is preparing for Juventus’ Champions League clash against Lyon. Ronaldo’s side find themselves 0-1 behind ahead of the second leg of the round of 16 clash at the Allianz Arena. The 35-year-old had taken off for a short holiday with his partner in the small fishing village of Portofino after winning the Serie A title. Wojciech Szczesny Fires Cristiano Ronaldo Warning to Lyon Ahead of Champion League 2019-20 Match, Says ‘He Is Ready to Perform Another Miracle’.

Ronaldo, on Thursday, posted a lovely picture with his three kids on Instagram. The father of four captioned the beautiful image as “Feeling loved.” In the picture, Ronaldo can be seen sitting on a couch with his three children on his lap. Twins Mateo and Eva, as well as Ronaldo and Georgina Rodriguez’s daughter Alena, were in the picture. Ronaldo’s eldest son Cristiano Jr is, however, missing in the family picture. Cristiano Ronaldo and Girlfriend Georgina Rodriguez Celebrate ‘Special Occasion’ With Romantic Dinner; Spanish Model Looks Stunning in Blue Dress (See Pic).

The Juventus star was spending some family time with his children at home ahead of Juventus’ Champions League last 16-second leg encounter against Lyon. Ronaldo also gifted himself a luxurious Bugatti Centodieci to his collection of cars after winning his second Serie A title in Italy.

The five-time Ballon d’Or winner scored 31 goals in 36 matches in the league and finished second in the league golden boot race behind Lazio’s Ciro Immobile. He also failed to win any personal accolades this season with teammate Paulo Dybalawinning the Most Valuable Player of the League award.

(The above story first appeared on LatestLY on Aug 06, 2020 07:53 PM IST. For more news and updates on politics, world, sports, entertainment and lifestyle, log on to our website latestly.com).