In the last week, Cristiano Ronaldo lodged a transfer request to Manchester United, stating that he was unhappy with the club's mindset regarding new summer signing. According to AS, Ronaldo's agent Jorge Mendes has met with Barca president Joan Laporta to discuss the player's move to Camp Nou. 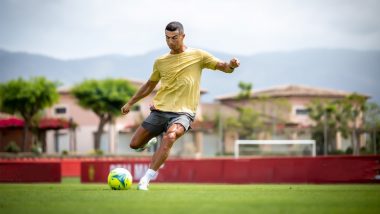 Cristiano Ronaldo's agent Jorge Mendes is reportedly hunting for a suitable club for the player as the Spanish and Italian media confirm that the player's agent had a meeting with Barcelona president Joan Laporta for a potential summer transfer. Ronaldo has already submitted a transfer request to Manchester United and wants the club to let him leave in this summer window. However, the news of the meeting between Mendes and Laporta has been triggered the possibility of the forward's exit from Old Trafford.  Cristiano Ronaldo Transfer News: Portugal Star Tells Manchester United He Wants To Leave

In the last week, Ronaldo lodged a transfer request to Manchester United, stating that he was unhappy with the club's mindset regarding new summer signing. The Red Devils under new coach Erik Ten Hag have been unable to sign any big player in this transfer window despite being linked with the likes of Paulo Dybala, Gareth Bale, Frenkie de Jong and Antony. After the departure of Paul Pogba and Edinson Cavani at the end of the season, United board have not found any suitable replacement for them.

After a failed season in 2021-22, many football pundits advised that the Red Devils should bolster their all three fronts- Defense, midfield and attack with reinforcing the squad by new signings. As of now, Tyrell Malacia, a Dutch left-back, has reportedly been signed from Feyenoord whose medical is due at Manchester. According to David Ornstein, Man United have reached a verbal agreement with Christian Eriksen for a three-year deal, with nothing being finalized yet. And in the case of De Jong, Barca do not want to sell the midfielder, with shaky economical disaster looming.  Cristiano Ronaldo Transfer News: Chelsea Considering Move for Manchester United Superstar

The 37-year-old Portuguese, who wants to feature in UEFA champions league desperately, has informed the club that the English club have no vision in building a strong squad for the 2022-23 season due to their soft approach to signing players in this summer window. An underwhelming season in 2021-22 saw Manchester United lose a top-four spot in English Premier League, resulting in losing a berth in next year's champions league.

With the Portuguese forward determined to leave Old Trafford before the season starts, Chelsea and Bayern Munich are thought to be interested the UCL top scorer. According to The Athletic, Chelsea are considering for a summer move to land Cristiano Ronaldo at Stamford Bridge as coach Thomas Tuchel is a ardent admirer of Portuguese ace. However, Barcelona have recently emerged as a potential bidder. Ronaldo's agent Jorge Mendes met Joan Laporta in Spain to discuss about a possible transfer that can see the Portuguese play for Barcelona in 2022-23 season, according to AS.  Cristiano Ronaldo Latest Transfer News: 5 Clubs That Can Sign Manchester United Superstar This Summer

It is understood that Laporta is a big fan of Ronaldo since the player's stint at Real Madrid and is very keen to sign the Portuguese this summer as Barcelona are currently going through a squad overhaul. However, it remains to be seen whether Ronaldo will play at Camp Nou next season where he used to silent the Barcelona fans by scoring goals for Los Blancos and doing iconic 'calma calma' celebrations or leave for Chelsea or Bayern Munich.

(The above story first appeared on LatestLY on Jul 05, 2022 01:12 PM IST. For more news and updates on politics, world, sports, entertainment and lifestyle, log on to our website latestly.com).