Cristiano Ronaldo has been in the news for not scoring a single goal for Juventus in Serie A. 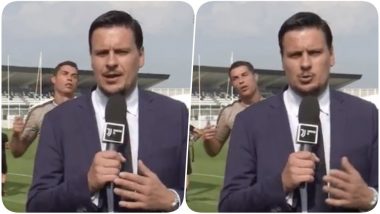 Cristiano Ronaldo has been in the news for not scoring a single goal for Juventus in Serie A. However, the former Real Madrid player is leaving no stone unturned to sweat it out on the field during the practice session of Juventus. Recently, during his training, Ronaldo showed his funny side by videobombing a journalist while the latter was giving a piece to camera. Cristiano Ronaldo Congratulated Luka Modric After he Won the UEFA Player of the Year Award 2018

While the members were lining up for warm up, CR7 stood right behind the scribe from Juventus. He was seen making funny faces as the journalist was unaware of what was happening behind his back. CR7 gave a brief appearance and with a mischievous grin on his face, he ran away with the members of his team for practice.

Talking about Ronaldo’s Juventus the team currently stands on the number one position with 9 points in their kitty. The team has so far played three matches and won all three of them. Paulo Dybala and Ronaldo were touted as the fearsome duo for the opponents. However, both have not scored a single goal in Serie A. In an interview with a popular new agency, Dybala spoke about Ronaldo and said the team was going brilliant. “It's going brilliantly. We just need to keep training together. We've got the whole season ahead of us. [When I heard Ronaldo was joining] I said to myself: 'After having had the fortune of playing with [Lionel] Messi in the national team, now I have the opportunity to play with Ronaldo at Juve.' It's amazing."

(The above story first appeared on LatestLY on Sep 14, 2018 01:21 PM IST. For more news and updates on politics, world, sports, entertainment and lifestyle, log on to our website latestly.com).