Ronaldo has already set sights on Daei’s record and could well achieve it within the year with Portugal to play at least five more UEFA Nations League games before the year-end. Ronaldo stands on 101 goals from 165 matches and needs nine more to become the highest goalscorer in international football. 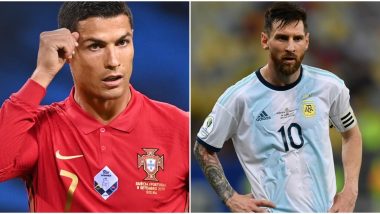 Cristiano Ronaldo etched his name in the record books once again with a mighty strike for Portugal against Sweden in 2020-21 UEFA Nations League. Ronaldo became the first European footballer and only second in history to score 100 international goals. The Portuguese reached the milestone with a wonderful curled free-kick on the brink of half-time against Sweden to achieve the feat. It makes him only the second men’s footballer after Iran’s Ali Daei to score 100 or more international goals. Ronaldo, 35, though wasn’t done yet. He returned from the break and netted another screamer to make 101 and is now just eight behind from equalling Daei’s 14-year record of 109 goals for a country. As Ronaldo celebrates’ yet another milestone, we compare Lionel Messi and Ronaldo’s international goals. Most International Goals in Football: Check Out Top 10 Highest Goalscorers Including Cristiano Ronaldo.

Ronaldo has already set sights on Daei’s record and could well achieve it within the year with Portugal to play at least five more UEFA Nations League games before the year-end. Ronaldo stands on 101 goals from 165 matches and needs nine more to become the highest goalscorer in international football. Take a look at international goalscoring history of both Messi and Ronaldo. Cristiano Ronaldo Records Made And Broken With 100th International Goal Scored During Portugal vs Sweden UEFA Nations League 2020.

Ronaldo has scored 101 goals in 165 matches for Portugal. He is already 31 goals ahead of rival Messi albeit having played 27 matches more. Messi, currently placed 15th in the overall list of most goals scored in international football, has 70 goals from 138 games for Argentina.

Ronaldo’s most successful year in Portugal colours came in 2019 when he managed 14 goals in 10 matches. He had also scored 13 goals in as many games in 2016 and 11 times the following year. Portugal won the Euro Championship in 2016 and the UEFA Nations League last year. Messi’s most prolific year in Argentine jersey came in 2012 when he scored 12 times in just nine games. Messi is yet to play a game this calendar year while Ronaldo scored twice in the only match he played.

Surprisingly, almost a half-percentage of Messi’s 70 international goals have come in friendlies. The Argentine has played 47 friendlies and scored 34 times. Ronaldo has played the same number of friendlies but scored only 17 goals. In contrast, Ronaldo is a man of big occasion.

Amidst all the contrast, Ronaldo and Messi share a tiny similarity too. Both failed to score a goal in their debut year. Ronaldo made his debut for Portugal in 2003 and played two games but did not score. He scored his maiden goal against Greece in Euro 2004. Messi made his debut two years later and played five games but remained without a goal. His maiden Argentina goal came against Croatia in 2006 international friendly.

17 years have passed since Ronaldo made his debut, 15 since Messi and strangely both still look at their prime. Ronaldo will certainly be eyeing Daei’s record and Messi could be soon be eyeing his. Time will tell how far they go and how close they will be when Messi and Ronaldo finally say goodbye!

(The above story first appeared on LatestLY on Sep 09, 2020 05:36 PM IST. For more news and updates on politics, world, sports, entertainment and lifestyle, log on to our website latestly.com).