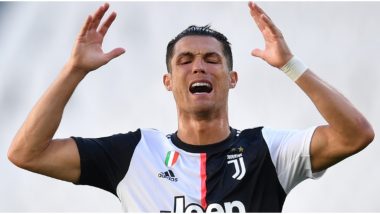 Cristiano Ronaldo scored his 30th goal when Juventus faced AC Milan in Serie A 2019-20 making it 10th time in 11 seasons that the Portuguese superstar has netted 30 or more goals. It was also the first time in Italy that Ronaldo crossed the 30-goal mark having managed only 28 in his debut campaign. But Ronaldo’s goal couldn’t inspire Juventus to a win with Milan running out 4-2 winners after downing the champions to their fourth league defeat this season. Ronaldo was, in contrast, embarrassed after his attempt to drop deep and create play proved futile and Milan scored on the counter. Zlatan Ibrahimovic Mocks Cristiano Ronaldo After Converting Penalty During AC Milan vs Juventus, Serie A 2019-20 (Watch Video).

With Juventus pegged back 2-2 within 13 minutes of going 2-0 head, Ronaldo decided to drop deep and help his side take control of the game yet again. But unfortunately paved the way for Milan to take the lead which proved decisive in the match result. The incident occurred in the 64th minute just two minutes after Franck Kessie had levelled the score for AC Milan. Cristiano Ronaldo Wowed by Girlfriend Georgina Rodriguez, Calls Her ‘Most Beautiful Woman on Earth’.

This is what happens when Ronaldo tries to drop deep like Messi. pic.twitter.com/4izB1Igu8h

With the game taking a sudden turn and Milan starting to dominate, Ronaldo dropped deep, received a pass from Leonardo Bonucci and tried to carve a way out for his side. But his pass hit the heels of an advancing Adrien Rabiot and came back to him. Ronaldo then tried to dribble his through but was intercepted and Milan scored on the counter.

Substitutes Giacomo Bonaventura and Hakan Calhanoglu cut Ronaldo short before the latter found another sub-Rade Krunic. He was fouled by Daniele Rugani but Franck Kessie picked up the rebound and put AC Milan 3-2 ahead with a brilliant solo goal. Soon social media was full of videos and posts about Ronaldo trying to be a playmaker like Lionel Messi but failing miserably.

Who is the GOAT Then?

Bro Ronaldos greatest achievement is keeping his name relevant in the era of Messi. It’s not even close man. #Messi 🐐

Another pure reason why CR7 ain't better nor more complete than Leo, he's great and all but he's just a goalscorer, Leo scores, assists and can drop deep and create again.

Lol, he should just stick to his tap-ins and penalties

how is he in mentioned in the same sentence as Messi 😭😭

Some Though He Was the Best Playmaker

But i thought he's the best playmaker in the world when he wants to?

When Ronaldo Tried to Become Messi

“This is what happens when Ronaldo tries to drop deep like Messi,” one fan wrote on Twitter while also attaching a video of the Portuguese failing to drive the ball from the midfield. Messi has already recorded 20 assists this season and is one of the best when it comes to scoring and as well as creating chances and recording assists.

(The above story first appeared on LatestLY on Jul 08, 2020 07:44 PM IST. For more news and updates on politics, world, sports, entertainment and lifestyle, log on to our website latestly.com).