Zlatan Ibrahimovic Mocks Cristiano Ronaldo After Converting Penalty into a Goal During AC Milan vs Juventus, Serie A 2019-20 (Watch Video) 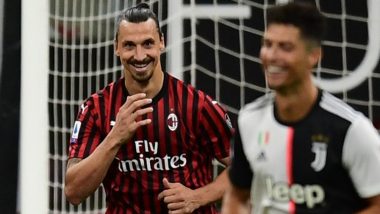 Zlatan Ibrahimovic was in a red hot form yesterday during their match against Juventus at San Siro and scored a goal at the 62nd minute of the game. The Swedish striker converted a penalty into a goal and post successfully converting a penalty into a goal, the former LA Galaxy striker was seen mocking at the five-time Ballon d’Or winner. So as the Swede was preparing himself to take the penalty, Ronaldo was trying his level best to distract Zlatan. But Zlatan was as cool as ice and did not bother much about the attempts by CR7. Cristiano Ronaldo Nets 30th Goal of the Season in Juventus' 2-4 Loss Against AC Milan in Serie A 2019-20.

Ronaldo said to his goal-keeperWojciech Szczęsny before the penalty kick, "Tek, you know him (Ibrahimovic)." However, these words didn't affect Zlatan and the Swede successfully converted a penalty into a goal. This act obviously gave a boost to the hosts. However, after this, Zlatan was seen laughing at Cristiano Ronaldo for his act  The video of the incident went viral on social media and was shared by the netizens.

Cristiano Ronaldo also scored a goal in the game and this was his 25th goal in his 26 appearances in the Serie A 2019-20. However, Juventus lost the match 4-2, however, they continue to dominate the Serie A 2091-20 points table with 75 points in their kitty. Juventus will next play against Atalanta on July 12, 2020, at the Allianz Stadium.

(The above story first appeared on LatestLY on Jul 08, 2020 03:57 PM IST. For more news and updates on politics, world, sports, entertainment and lifestyle, log on to our website latestly.com).