Maradona commenced his professional career with Argentinos Juniors at the age of 16. The left-footed forward represented Boca Juniors, Barcelona, Napoli, Sevilla and Newell's Old Boys as a player. 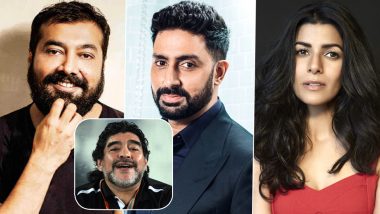 We have seen so many uncertain deaths this year and have lost numerous legendary personalities from all the fields of work. Adding to the numbers is Argentine football legend, Diego Maradona. The Gimnasia coach passed away at the age of 60 after suffering a heart attack. The news was confirmed by the authorities on Wednesday. Boris Becker Goes Bankrupt: From Diego Maradona to Mike Tyson, Here's a Look at Sports Personalities Gone From 'Riches-to-Rags'.

According to the reports, Maradona was hospitalised at the start of November, a few days after celebrating his birthday. He was complaining of low spirits and fatigue and was moved to the hospital immediately. His tests at La Plata clinic revealed a blood clot on the brain, which was operated on successfully. Uneventfully, the legendary coach could not make it after he suffered a cardiac arrest, and paramedics at the scene failed to revive him.

Twitter has been abuzz with condolences for Diego. Celebs like Anurag Kashyap, Prithvi paid tribute to the footballer. They shared pictures of Maradona and expressed their grieve on this huge loss. Fact Check: Diego Maradona Fat Video Going Viral Is a Scene From 2015 Movie 'Youth' Played by Actor Roly Serrano.

Check Out The Tweets Here:

A LEGEND IS GONE.

RIP. Thank you. There will never be another like you.

Cant quite believe DM has gone. Hard to process. He always seemed indestructible. I had 10 hours with the man!! I touched his left foot. We did our best to show the world the man, the myth, the fighter he was. The greatest #legend #DiegoMaradona @MaradonaMovie #Diego #maradona pic.twitter.com/4BSULN9rdt

Maradona commenced his professional career with Argentinos Juniors at the age of 16.  The left-footed forward represented Boca Juniors, Barcelona, Napoli, Sevilla and Newell's Old Boys as a player. He remained the coach of Argentina national team.

(The above story first appeared on LatestLY on Nov 25, 2020 10:35 PM IST. For more news and updates on politics, world, sports, entertainment and lifestyle, log on to our website latestly.com).