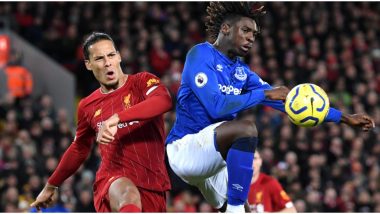 Everton vs Liverpool, Premier League 2019-20 Online Live Streaming and Live Telecast: English Premier League leaders Liverpool face Everton in a Merseyside derby with the Reds being ever so close to their maiden league title. With the Reds being two wins away from being crowned champions of England, the emotions are running high in the fans. In an unprecedented show of consistency, Liverpool have managed 82 points from 29 games. The Reds have only dropped 5 points this term which is simply staggering. Everton have struggled this term with 37 points from 29 games. The Toffees have to play out of their skin to get a positive result from this one.

Yerry Mina misses out for the Toffees with a thigh injury while attacking players like Theo Walcott, Cenk Tosun, Fabian Delph are also out with fitness issues. Mason Holgate and Michael Keane at the heart of defence have the all-important role of keeping Liverpool’s attackers at bay. Richarlison spoke about the qualities of Virgil Van Dijk ahead of the game which the Dutchman would not have appreciated. The Brazilian international will have to back up his claim with a fine showing to avoid an awkward situation.

Andrew Robertson and Mohamed Salah will undergo late fitness test to determine their availability for the clash. Apart from these two senior players, everyone is available for selection. Jordan Henderson has regained his fitness and will start in midfield along with Brazilian international Fabinho. Sadio Mane in attack is the cutting edge for the Reds and if he in form, Everton players could be in for a long day at work.

Where to Watch the Live Telecast of Everton vs Liverpool, Premier League 2019/20 Season Football Match? TV Channels in India

Fans can also watch the Merseyside Derby match live on online platforms. Disney+ Hotstar, the OTT platform of Star Network, will be live streaming the Everton vs Liverpool clash. Viewers can either visit the Disney+ Hotstar app or website. Since 2010, Everton have failed to beat Liverpool in the 18 Premier League games which is an indication of the dominance of the Reds in this fixture. Jurgen Klopp will want his men to go out and get the job done in a professional manner.

(The above story first appeared on LatestLY on Jun 21, 2020 07:00 PM IST. For more news and updates on politics, world, sports, entertainment and lifestyle, log on to our website latestly.com).