FC Goa will host Jamshedpur FC in match 24 of the Indian Super League (ISL) 2019-20 at the Jawaharlal Nehru Stadium on November 26, 2019 (Tuesday). The Gaurs are unbeaten this season and as a result find themselves in the third position on the points table. Meanwhile, without a win in the last two games, has left the Men of Steel outside of the top four. 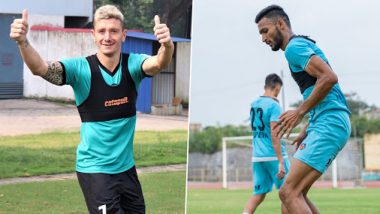 FC Goa will host Jamshedpur FC in match 24 of the Indian Super League (ISL) 2019-20 at the Jawaharlal Nehru Stadium on November 26, 2019 (Tuesday). The Gaurs are unbeaten this season and as a result, find themselves in the third position on the points table. Meanwhile, a draw and a loss in the last two games, has left Men of Steel outside of the top four spots. The sides have faced each other four times in ISL and FC Goa have the upper hand. In head-to-head records between the teams in their four matches, FC Goa have won two matches while Jamshedpur have a solitary victory. The other match ended in a draw. FC Goa Vs Jamshedpur FC - Football Score.

FC Goa will be without the services of Seiminlen Doungel and Hugo Boumous as they both were suspended by AIFF for misconduct during the NorthEast United vs Goa clash on November 1, 2019. Ferran Corominas will be the main threat from the home side as the Spaniard will look to get on the scoreboard and get himself clear in the golden-boot race. Jamshedpur’s own Spaniard Sergio Castel is the joint top scorer this season and will be looking to add to his tally of three goals. Midfielder Piti is likely to miss out on this clash as suffered a hamstring injury against ATK and was forced to come off before half-time. Ahead of this clash, we take a look at the head-to-head records between the two teams. FCG vs JFC Dream11 Prediction in ISL 2019–20: Tips to Pick Best Team for FC Goa vs Jamshedpur FC, Indian Super League 6 Football Match.

The last meeting between the sides ended in a stalemate with none of the sides creating many goal scoring opportunities. Goa had the lion’s share of possession and had more attempts on goal but most of them didn’t find the target. In the end both the teams looked happy to end the match in a draw.

The Men of Steel dominated the match from the first whistle. Soosairaj opened the scoring for the home side on the 17th minute but Edu Bedia equalised for the visitors just after the half-hour mark. Jamshedpur turned on the style in the second-half and blew Goa away with three second-half goals.

This match was dominated by the away side as the Gaurs had 76 percent possession in the match. Ferran opened the scoring for the visitors on 29th minute and then doubled Goa’s lead just after half-time. Manuel Lanzarote sealed the match with a goal in the 69th minute. Naveen Kumar was sent off for Goa in the final minutes but it didn’t matter as Jamshedpur never really troubled the away side.

FC Goa will be confident that even without their two main players they can get a win at home. The Gaurs are unbeaten and as a result occupy the third spot on the points table, meanwhile Jamshedpur are fifth and will look to climb above Goa with a win.

(The above story first appeared on LatestLY on Nov 26, 2019 03:20 PM IST. For more news and updates on politics, world, sports, entertainment and lifestyle, log on to our website latestly.com).