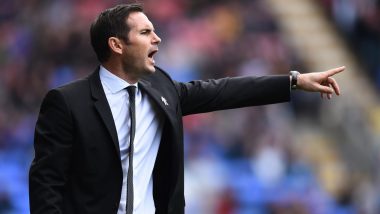 During the first half of the contest at Anfield, Lampard was seen engaging in a heated argument with Klopp and his number two Pep Lijnders, before fourth official stopped the verbal altercation.

Lampard used cuss words after Liverpool midfielder Naby Keita was felled near the Chelsea box by Mateo Kovacic. Lampard wasn't happy with the foul being given and also something that was said by Lijnders, who was sitting on the Liverpool bench, behind Klopp. Angry Frank Lampard Asks Liverpool Bench to FU** Off, Gets Into a Row With Jurgen Klopp During Liverpool vs Chelsea, EPL 2019-20 (Watch Video).

Lampard was heard using abusive language towards Lijnders and when Klopp tried to intervene, the former Chelsea midfielder used cuss words for him as well.

To make matters worse for Lampard, Trent Alexander-Arnold converted from the free-kick to help Liverpool go 2-0 up. Chelsea eventually lost the match 3-5 and it saw them drop to fourth on the Premier League table.

According to The Times, Chelsea won't be punishing Lampard for his touchline behaviour despite his choice of words going viral on social media.

Following the end of the match, Lampard had warned champions Liverpool against complacency and also urged them against being arrogant in their victory.

"For me, it wasn't a foul from Kovacic, and there were a lot of things that weren't going our way. But I've not got a problem with Jurgen Klopp. The way he's managed this team has been fantastic," Lampard told Sky Sports.

"Fair play to Liverpool Football Club, they've won the league, but also don't get too arrogant with it. That was my point, but it's done. In match play, you can get emotional and that was it," he added.

(The above story first appeared on LatestLY on Jul 24, 2020 06:06 PM IST. For more news and updates on politics, world, sports, entertainment and lifestyle, log on to our website latestly.com).