Arsenal have signed Gabriel Jesus from Manchester City on a long-term contract, the club said in a statement on Monday. 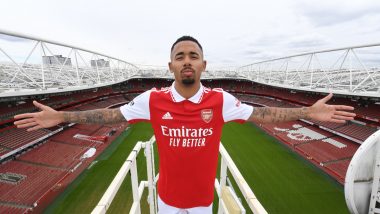 London, July 4 : Arsenal have signed Gabriel Jesus from Manchester City on a long-term contract, the club said in a statement on Monday. Jesus, who scored 95 goals in 236 appearances for City, has signed a "long-term contract" with Arsenal after deciding to leave the Premier League champions in search of more regular first-team action. The 25-year-old forward established himself as one of the leading strikers in the Premier League in recent seasons, scoring 95 goals in 236 appearances in all competitions during his five seasons in Manchester City. Arsenal Complete Gabriel Jesus Signing From Manchester City, Announce Player’s Arrival to North London (See Pics and Video).

Gabriel has won the Premier League title four times, the FA Cup, and the League Cup three times. He is a regular in the Brazil national team, making 56 appearances and scoring 19 times since making his full international debut for his country in September 2016. He was a member of the squad which won the Copa America in 2019. During his international career Gabriel has also notably won a gold medal at the 2016 Rio Olympic Games, and featured at the 2018 FIFA World Cup.

Gabriel developed through the youth setup at Palmeiras, signing a youth contract in 2013, with his prolific goalscoring ensuring he quickly progressed into the first-team squad, making his debut as a 17-year-old in March 2015. During his time with Palmeiras, Gabriel was an integral part of the club's Campeonato Brasileiro Serie A winning side in 2016, when he was voted as the league's Bola de Ouro - Player of the Season. Frenkie de Jong Transfer News: Manchester United Yet To Agree Personal Terms With Midfielder After Barcelona's Ultimatum.

Admitting Arteta's presence at the Emirates was influential in his decision to join the Gunners, Jesus said, "We spoke a couple of times about the club, the players, the project and the future. I believe 100 percent in Mikel. I had a very good time with him before, he's a very good guy and a very good coach as well. He helped me a lot. We would always stick together after the training sessions and do some finishing or something. He's a very intelligent guy and was an amazing player, so if he knows something he can teach me or the young players."

Mikel Arteta said, "I'm very excited. The club has done a tremendous job to recruit a player of this stature. I know Gabriel personally very well, and we all know him well from his time in the Premier League and being really successful here. This is a position that's been on our radar for a long time now and we have managed to get a player that we all wanted, so I'm really happy." Gabriel will wear the number 9 shirt and will join up with the Gunners squad for pre-season training soon.

(The above story first appeared on LatestLY on Jul 04, 2022 03:46 PM IST. For more news and updates on politics, world, sports, entertainment and lifestyle, log on to our website latestly.com).