Having lost out on the opportunity to attain European supremacy, both these sides would give their best to ensure that they end their campaign on a high. Peru had lost their semi-final match against Brazil while Argentina eliminated Colombia at the end of a thrilling penalty shootout. 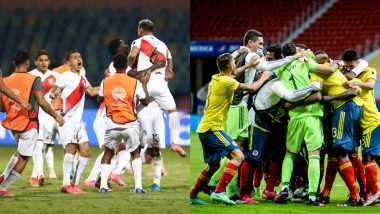 With a third-place up for grabs, Colombia and Peru would aim at ending on a high when they take on each other on Saturday, June 10. The match would be played at the Estadio Nacional de Brasilia and is slated to start at 04:30 AM IST (Indian Standard Time). Peru went down to defending champions Brazil in the first semi-final while Colombia were knocked out by Lionel Messi and his Argentina side, who won the contest after a dramatic penalty shootout. Having lost out on the opportunity to attain European supremacy, both these sides would give their best to ensure that they end their campaign on a high. Lionel Messi’s Team Argentina Sweats it Out for Copa America 2021 Finals Against Brazil (See Pics)

In terms of head-to-head statistics, Colombia won a total of 26 wins and Peru have had the last laugh on 19 occasions in the total 67 matches that they have played each other. Peru had defeated Colombia 2-0 in the group stages of this year's Copa America. Neymar’s Brazil Looks to Clinch Copa America 2021 Title, Sweats it Out Ahead of Final Match Against Argentina (See Pics)

The semi final clash of Copa America 2021 between Colombia vs Peru will be played at the Estadio Nacional de Brasilia on July 10, 2021 (Saturday morning). The match has a scheduled time of 05:30 am IST (Indian Standard Time).

Sony Network are the official broadcasters of Copa America 2021 and will telecast Colombia vs Peru match. Fans can tune into Sony Ten 2 to catch the game live on TV. Those unable to watch the telecast can turn to online platforms, SonyLiv will provide Colombia vs Peru live online streaming in its app and website while Jio TV will also stream the game.

(The above story first appeared on LatestLY on Jul 10, 2021 04:00 AM IST. For more news and updates on politics, world, sports, entertainment and lifestyle, log on to our website latestly.com).