Iceland Squad for 2018 FIFA World Cup in Russia: Lineup, Team Details, Road to Qualification & Players to Watch Out for in Football WC

Iceland will play an international friendly match against Ghana on June 7 as a part of warmup before the main event begins in Russia. 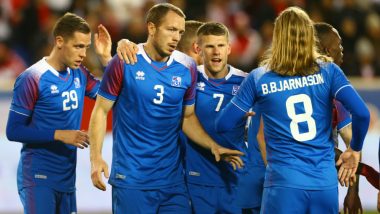 The smallest country in terms of population to qualify for the FIFA World Cup 2018, Iceland has taken world football by storm off late, and it all started with their jaw-dropping performance in the 2016 European Championship in France, where they reached the quarter-finals. They even famously eliminated England on their way sending their fans in a tizzy. Their coach in the tournament, Lars Lagerback then stepped down passing the mantle to another capable man in Heimar Hallgrimsson who has continued the with the goods. Iceland have announced their 23-man world cup squad which included Everton midfielder Gylfi Sigurdsson. We will take a detailed look at Iceland team lineup, their road to qualification in 2018 FIFA World Cup, players to watch out for and more. FIFA World Cup 2018 Schedule in IST for PDF Download: Fixtures, Groups, Time Table with Match Timings & Venue Details of Football WC in Russia.

Their No 1 is one-time movie director Hannes Halldorsson who plays club football for Danish club Randers FC and his displays in Euro 2016 were quite impressive. Aberdeen defender Kári Árnason is the team’s main man at the heart of defense and will have close pal Ragnar Sigurdsson for the company. Their midfield has Gylfi Siggurdson who is recovering from a knee injury but was in good form for EPL side Everton. The playmaker was instrumental in

Iceland’s run-up to the quarters in Euro 2016 and fans will be hoping he recovers in time. Skipper Aron Gunnarsson is the holding midfielder, and his style of play gives freedom to the attackers to venture forward with ease.

Jon Dadi Bodvarsson looks more and more likely to get the lone striking role in Russia with regular forward Kolbeinn Sigthorsson battling a string of injury setbacks. The injuries are proving to be a bottleneck for Iceland and may alter their playing style in the FIFA World Cup 2018.

Iceland surprised many when they sealed the automatic qualification berth from Group I of the European Word Cup 2018 qualifiers finishing above the powerful Croatian side. Iceland had seven wins out of ten to finish with 22 points. Gylfi Sigurdsson was the star of the qualifying campaign for Iceland finishing with 4 goals.

Performance in the 2014 World Cup

Iceland came close to qualifying for the 2014 FIFA World Cup in Brazil but were knocked out by Croatia in the playoffs.

Arnor Ingvi Traustason: The young midfielder has 5 goals in 18 matches for Iceland, and his recent move to Malmo FC in Sweden has helped him grow as a player and step up his game by a level or two. His darting runs from midfield will be important for Iceland in Russia.

Gylfi Sigurdsson: The Everton midfielder as expected should be fit by the start of the World Cup in Russia and can play as an attacking midfielder or a secondary striker. He is entrusted with getting the goals for his side and is the creative force for Iceland.

Iceland will play an international friendly match against Ghana on June 7 as a part of warmup before the main event begins in Russia. Their first game of FIFA World Cup 2018 is up against previous edition’s finalists, Argentina on June 16. It will be followed up by two more games with Group D members, Nigeria on June 22 and Croatia on June 26.

(The above story first appeared on LatestLY on May 22, 2018 04:02 PM IST. For more news and updates on politics, world, sports, entertainment and lifestyle, log on to our website latestly.com).