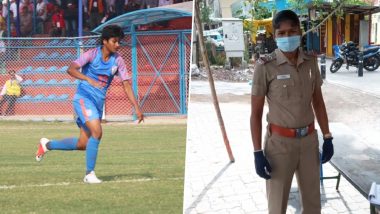 While being away from footballing action, Indian women’s star Indumathi Kathiresan has donned the police uniform to help her country in the fight against coronavirus. India is one of the countries severely hit by the virus, as close to 1.4 lakh positive cases have been recorded until now while around 60,000 people have recovered. The national team midfielder plays for Sethu FC in Indian Women’s League (IWL) and led them to the title in the 2018-19 season. World T20 Winner Joginder Sharma Joins Battle Against Coronavirus (See Pics).

However, the Tamil Nadu born footballer has not played competitively since the end of the third season of IWL as it was reported that she has been denied permission by Chennai city's Police department. The midfielder, instead of the Indian ‘Blue’ has put on the ‘Khaki’ colours and is working on the frontline during these testing times. AIFF Nominate Sandesh Jhingan and Bala Devi for Arjuna Award.

The photo of Kathiresan in a police inform was shared recently by Chennaiyan FC’s fan group Supermachans. ‘We've seen her bossing the midfield in a football jersey. She's now fighting for us from the frontline in a police uniform. Thank you Indumathi Kathiresan. We salute you’ they captioned their post.

We've seen her bossing the midfield in a football jersey. She's now fighting for us from the frontline in a police uniform. Thank you Indumathi Kathiresan. We salute you 💙#OneOfOurOwn #தமிழச்சிடா pic.twitter.com/elZuueS22s

Indumathi Kathiresan has been a cornerstone of Indian women’s football since her debut on 2014. She has represented the national team 34 times, scoring a total of 12 goals with an impressive rate. The midfield maestro was part of the Indian side which won a gold medal at the 2016 Asian Games.

Kathiresan was also played at the 2019 SAFF Women’s Championship and was the top scorer of the competition with four goals. But out of action sonic 2019, she did not feature in the fourth edition of IWL, which took place from January 24, 2020 to February 14, 2020 in Bengaluru.

(The above story first appeared on LatestLY on May 25, 2020 04:17 PM IST. For more news and updates on politics, world, sports, entertainment and lifestyle, log on to our website latestly.com).