Italy vs England, Euro 2020: A Look At Head-to-Head Record Between Two Teams Ahead of European Championship Finals

Italy and England meet each other in the finals of Euro 2020 at the Wembley Stadium in London on July 11, 2021 (Sunday). Both teams have been sensational this campaign and will put their undefeated record to the test as they look to be crowned as the European champions. 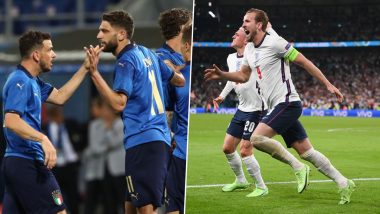 Italy and England meet each other in the finals of Euro 2020 at the Wembley Stadium in London on July 11, 2021 (Sunday). Both teams have been sensational this campaign and will put their undefeated record to the test as they look to be crowned as the European champions. So ahead of the summit clash at the 60th edition of the European Championships, we take look at the head-to-head record between the two teams. England Chase History As They Face Formidable Italy in Final.

The teams have met each other a total of 27 times in international football and it is Italy who have the better head-to-head record. The Azzurri have won 11 encounters between the sides with the Three Lions registering eight wins while the remaining have ended in a draw. Both sides are unbeaten in Euro 2020 and face each other in the finals of the showpiece event.

2014 World Cup, England 1-2 Italy: This is the last meeting between the two teams in a major competition and it went Italy’s way. The sides met in the group stages of the 2014 World Cup with the Azzurri emerging victorious but both sides failed to make it past that stage.

Euro 2012, England 0-0 Italy (2-4): The last Euro meeting between the two teams was in 2012 and it was once again the Azzurri coming on top. Italy bettered the Three Lions in a penalty shootout to book a semi-final place.

1998 World Cup Qualifiers, Italy 0-0 England: England needed a point to make it to the finals while for Italy, it was a must-win tie. The Three Lions managed to hold Italy to a goalless draw and made it directly to World Cup while Italy had to play a second-round qualifying tie.

1998 World Cup Qualifiers, England 0-1 Italy: It was once again Italy coming out on top in a competitive meeting between the two teams. Gianfranco Zola scored the game’s only game early on and the Azzurri’s held on to a crucial three points.

1990 World Cup, Italy 2-1 England:  Italy and England locked horns in the third-place game after both sides failed to lose their respective semifinal clashes. The Azzurri defeated England 2-1 where Roberto Baggio and Salvatore Schilacci scored for the Italians while David Platt scored the only goal for the English.

(The above story first appeared on LatestLY on Jul 11, 2021 01:51 PM IST. For more news and updates on politics, world, sports, entertainment and lifestyle, log on to our website latestly.com).