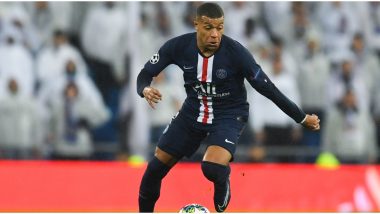 Kylian Mbappe avoided a torn ankle ligament but is still a major doubt for Paris Saint-Germain’s 2019-20 Champions League campaign. The French forward limped off in the first half of PSG’s 1-0 French Cup final win against Saint-Etienne after a horror tackle by Loic Perrin. The St-Etienne captain was shown a straight red card for his rash challenge that left Mbappe writhing in pain and limping off the pitch after just 26 minutes of play. He later appeared holding crutches during the presentation ceremony. Kylian Mbappe Transfer News: French Striker to Stay at PSG Next Season ‘No Matter What’.

The club revealed in a statement that the forward escaped ligament damage but have badly sprained his right ankle. Mbappe has “a sprained right ankle with significant ligament damage,” the club said in a statement. The 21-year-old’s right ankle was seen turning as he fell from Perrin’s tackle. And during the presentation ceremony, Mbappe could be heard telling France president Emmanuel Macron “It went crack.” Asked if he had broken a bone by the France Premier, Mbappe had replied: "No, I don't think so."

PSG are set to face Lyon in the Coupe de la Ligue final on July 31 – a match Mbappe is set to miss. He is also a major doubt for their Champions League quarter-final match against Atalanta next month. He will undergo further tests in the next 72 hours to determine the extent of the injury. “Everyone is worried. Everyone who saw the foul is worried. Of course, I’m worried,” PSG coach Thomas Tuchel said after his team’s win.

Mbappe’s unavailability for the Cup final and doubts over his participation in the Champions League quarter-final will come as a big blow to the French giants. Coach Tuchel values the Frenchman and sees him as vital to his style of play. In case he does miss the Champions League quarters, this will be the second consecutive season that PSG will play a UCL knockout match with one of Neymar and Mbappe absent.

(The above story first appeared on LatestLY on Jul 25, 2020 10:28 PM IST. For more news and updates on politics, world, sports, entertainment and lifestyle, log on to our website latestly.com).