Kylian Mbappe looked set to depart from PSG and Real Madrid looked to be his likely destination but the French club didn't accept any of the reported bids made by Los Blancos. While it has been widely speculated that he would leave for free next summer, PSG Sporting Director Leonardo has offered a different take on this issue, suggesting that the Frenchman would sign a new contract. 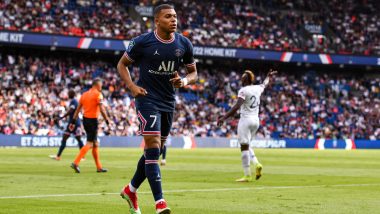 One of the areas of focus in the summer transfer window was Kylian Mbappe, who was reportedly not keen on penning a new deal with PSG and instead was hoping to make a move to Real Madrid. And the Spanish giants too bid for him. Not once but thrice--all of which was turned down-- and now, PSG Sporting Director Leonardo says that the French striker was integral to the club's plans and insisted that a new deal can be worked out between both parties. If Mbappe doesn't sign a new contract this year, he would be a free agent next year and Real Madrid would be the overwhelming favourites to acquire his signature. But Leonardo insisted that the World Cup winner would stay back at PSG after this season. "I don't see Mbappe leaving at the end of this season. Nobody is thinking about the future of Paris Saint-Germain without Kylian," he said while interacting with Canal Plus. Will Lionel Messi Play Tonight in Club Brugge vs PSG, UEFA Champions League 2021-22 Clash? Check Out Possibility of Argentine Star Making His European Debut For Parisians

"Kylian sort of represents the difference between the superficial and the deep. Kylian's relationship with Paris Saint-Germain is deep. That's why we don't think about anything else. Kylian represents many things. Not only because he is French or one of the best players in the world. He has a way of being that we like and one that everyone likes," Leonardo further added.

Real Madrid had emerged as favourites to sign Mbappe this summer and offered big money as well. But PSG turned down their last bid of €220 million and the move did not materialise. He further opened up about Real Madrid's bidding, stating that starting the negotiations for transfer very late into the window was something that PSG didn't like. "We were not happy with the behaviour of Real Madrid," he said, adding, "starting negotiations for one of the best players in the world in the last week of the transfer market generated a situation that we did not like. We were clear about our position with the offer. It was not enough, it was smaller than what we paid. The last offer they talked about never came. You can't organise a transfer market for two, three or four months and change your plans like that." Cristiano Ronaldo Matches Lionel Messi, Iker Casillas' Champions League Records Against Young Boys

With Mbappe staying at PSG this season, the French giants now boast of a star-studded and one of the deadliest attacking trios in club football, comprising Lionel Messi, the Frenchman and Neymar. Excited at the prospect of having these three stars in the club, he said, "Messi, Neymar and Mbappe are not something to look at for just one year. I think they complement each other, each one is No 1 in their characteristics. I don't see jealousy between them."

PSG on Thursday would begin their UEFA Champions League 2021-22 campaign against Club Brugge. They are currently at the top of the Ligue 1 standings, with 15 points from the five games they have played.

(The above story first appeared on LatestLY on Sep 15, 2021 07:39 PM IST. For more news and updates on politics, world, sports, entertainment and lifestyle, log on to our website latestly.com).