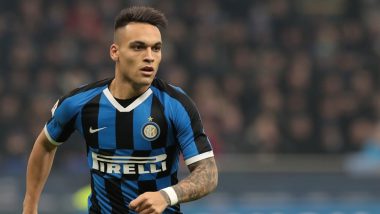 Inter Milan sporting director Piero Ausilio has insisted that forward Lautaro Martinez is not for sale amid interest from Barcelona. The La Liga leaders have reportedly prioritized the Argentine as their top transfer target and consider him as the perfect replacement for Uruguayan striker Luis Suarez. But Ausilio has reiterated that Barcelona must pay the €111 million release clause to sign Martinez this summer. Martinez had been in great form this season with 16 goals in 31 appearances before the Serie A season and football events across the globe came to a halt due to the coronavirus pandemic. Lautaro Martinez Advised By Luis Suarez to Stay At Inter Milan Amid Barcelona Links.

Martinez, who had also in the past expressed his desire to play alongside compatriot Lionel Messi at Barcelona, is available for €111 million, which is his release clause and is available from July 1 to July 15. The 22-year-old has drawn interest from several clubs including Barcelona who are prepared to offer the Argentine a contract worth €10m per year. The Catalan side have also been prepared to offer several players as part of a swap deal to lower the transfer price for Martinez but Inter have refused to meet any deal other than the release clause. La Liga 2019–20 Would Have Ended if Real Madrid Were on Top, Claims Ex- Barcelona President Ahead of Season Restart.

"As far as Martinez is concerned, there is only one way that he will leave Inter and that is by paying his clause," Ausilio told Sky Italia, "A clause that everyone knows – there is no point in hiding – is demanding, because it has both deadlines and commitments that must be kept very precise. It is a clause that expires in the early part of July so it won't last for a long time. And it is the only possibility that exists to take Lautaro away from Inter today,” he added.

Ausilio also further mentioned that he sees Martinez as a future player for Inter and that Inter’s future success depended on keeping talented players like the star forward at the club rather than selling them. "He is an important asset of the club, and let's not forget that he still has a three-year contract with Inter," Ausilio said. "Inter are not going to sell their most important players. We intend to keep them and eventually strengthen in the transfer market, and this also applies to Lautaro."

(The above story first appeared on LatestLY on May 28, 2020 10:11 AM IST. For more news and updates on politics, world, sports, entertainment and lifestyle, log on to our website latestly.com).