The former striker has advised Lautaro Martinez to stray at San Siro despite interest from the reigning Spanish champions as he believes that the Argentine is very young at the moment and will have time to go for other challenges in the future. ‘If I were him, I wouldn't change teams,’ he told La Gazzetta dello Sport. 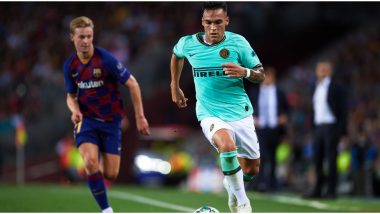 Lautaro Martinez has emerged as top transfer priority for Barcelona in recent months as they consider him to be the perfect replacement for Uruguayan forward Luis Suarez. However, the 33-year-old’s namesake, who played for the Catalan side and the Nerazzurri’s in the 1960s, has advised the Argentine to stay put at Inter Milan despite the links. The 1960 Ballon d’Or winner moved in the opposite direction as he joined the Italian club from Barcelona. Lautaro Martinez Transfer Update: Inter Milan Want Arturo Vidal and Antoine Griezmann From Barcelona in Exchange.

The retired Spanish international has urged Lautaro Martinez to stray at San Siro despite interest from the reigning La Liga champions as he believes that the Argentine is very young at the moment and will have time to go for other challenges in the future. ‘If I were him, I wouldn't change teams,’ Suarez told La Gazzetta dello Sport. Barcelona Target Lautaro Martinez Advised to Stay at Inter Milan by Hernan Crespo.

‘Making a decision on whether to stay or not is very complicated, although if Messi called him then it would be easy to think about it. However, we're talking about a boy who is still very young, and he has all the time in the world to go for other challenges in the future.’ the 85-year-old continued.

The former Barcelona man also added that Lautaro will not be a star at the Catalan club like he is in Italy. 'Let's say the truth, he would have less prominence in Spain than he does at Inter, I want to give [Lautaro] some advice – stay where you are.' he added.

Lautaro Martinez, 22, has made a huge impression this season with 16 goals in 31 appearances in all competitions and has emerged as one of the top strikers in Europe. The striker himself has expressed the desire to play alongside his idol and national team colleague Lionel Messi.

The Barcelona captain himself rates the young forward very highly as in a recent interview the 32-year-old said that Lautaro is an ‘impressive striker’, while adding that he has no idea of any potential deal.

(The above story first appeared on LatestLY on May 22, 2020 02:34 PM IST. For more news and updates on politics, world, sports, entertainment and lifestyle, log on to our website latestly.com).