The Rossoneri will be aiming to return to winning ways when they take on Lazio in the Serie A 2022-23. Continue reading to get live streaming and telecast details of the match, 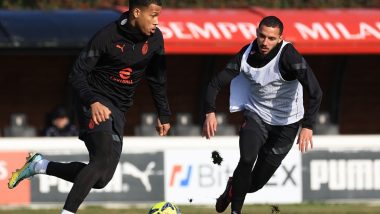 AC Milan will hope to step up in their pursuit of the Serie A title when they face Lazio in what is a crucial match. The Rossoneri would aim to narrow down the gap between themselves and leaders Napoli by clinching all three points from this game. But that would not be as easy a task as it seems, with Maurizio Sarri’s side bagging a win in their last Serie A match against Sassuolo. AC Milan on the other hand, are winless in their last three outings in all competitions. A round of 16 defeat to Torino in the Coppa Italia was followed by a 2-2 draw against Lecce. Stefano Pioli’s side then faced a 0-3 defeat to Inter Milan in the final of the Supercopa Italiana. Pays de Cassel 0–7 PSG, French Cup 2022–23: Kylian Mbappe Hits Five As Parisians Rout Sixth-Tier Outfit to Enter Round of 16 (Watch Goal Video Highlights)

Pioli would be hopeful of his men ending their winless run. Lazio on the other hand, are placed sixth on the points table and a win in this contest will help them move up to the fifth spot and stay alive in contention for a Champions League berth. Sarri’s side beat Bologna 1-0 in their last game, which was a round-of-16 contest in Coppa Italia. They would miss the services of star striker Ciro Immobile who has a thigh injury. Mario Gila is also ruled out of this match.

A lot will depend on Olivier Giroud if AC Milan are to take three points from this away contest. The young Raphael Leao has been in fine form this season and hope to be at his best. Fikayo Tomori will be crucial in their backline, with the goal being guarded by Ciprian Tatarusanu with Mike Maignan ruled out.

When is Lazio vs AC Milan, Serie A 2022-23 Football Match? Know Date Time and Venue

The Serie A 2022-23 match between Lazio vs AC Milan will take place at Stadio Olimpico in Rome. The match will be played on Wednesday, January 25, starting at 1:15 am IST (Indian Standard Time). Fulham 0–1 Tottenham Hotspur, Premier League 2022–23: Harry Kane Scores As Spurs Break Into Top Five (Watch Goal Video Highlights)

Where to Get Live Telecast of Lazio vs AC Milan, Serie A 2022-23 Football Match?

How to Get Free Live Streaming of Lazio vs AC Milan, Serie A 2022-23 Football Match?

(The above story first appeared on LatestLY on Jan 24, 2023 04:40 PM IST. For more news and updates on politics, world, sports, entertainment and lifestyle, log on to our website latestly.com).