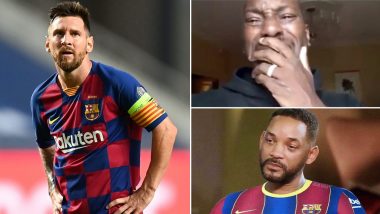 Barcelona suffered the worst defeat in the club’s Champions League history after an abject 8-2 surrender at the hands of Bayern Munich in the quarter-finals of UCL 2019-20. Barcelona, who came into the quarter-final clash unbeaten in their last five games, were left in shock after the humiliation Bayern handed them in 90 minutes. The Catalan side, five-time winners of the UCL, were 4-1 down in the first half and conceded four more in the final 45 minutes. Lionel Messi and Barcelona fans were shell-shocked after such an embarrassment in Europe’s top competition. Barcelona Have Sacked Manager Quique Setien After the 8–2 Humiliation Against Bayern Munich in UEFA Champions League 2019–20 Quarter-Final, Say Reports.

Thomas Muller opened the scoring as early as the fourth minute for Bayern and although David Alaba’s own goal levelled the score three minutes later, Bayern had raced 4- ahead within the opening half-hour. Ivan Perisic, Serge Gnabry got on the score sheet while Muller added another. Luis Suarez made it 4-2 at the start of the second half but it only invited more attacks from the German team. Joshua Kimmich made it 5 before Philippe Coutinho came off the bench to assist Robert Lewandowski and also put the match to bed with two strikes in four minutes. Bayern beat Barcelona 8-2. First Lionel Messi and Then Own Goals: Humiliating Record Shows Barcelona Depend More on Argentine and Opposition Own Goals After 8–2 Defeat Against Bayern Munich.

It was the first time in Champions League history knockouts that a team have conceded eight goals in a single match. Bayern had beat Barcelona 7-0 in 2013 but over two legs. In Lisbon on Friday, it was only humiliation and the club was soon trolled for the disastrous result. Fans also sympathised with Messi for dragging the club too long.

They love you at your best and trash you at your worst . Football is game of ups and downs ... Barcelona spoiled the world for a decade with their dominance! Let’s not forget that . Be thankful for all the joy this man has given you ! KingLeo🖤#barca_bayern #ChampionsLeague pic.twitter.com/XfnhlMy4ig

Barcelona's Reaction After Conceding So Many

Actually Only One Came From Barcelona

10 goals were scored during that match, but only 2 came from Barca pic.twitter.com/fYKJEK2G8P

Is like the translator is a Barca fan too🤣😂🤣😂 pic.twitter.com/5mxoHzSYS0

He Doesn't Deserve This

Messi should leave barca and go to Man city or Juve. He doesnt deserve this battering. pic.twitter.com/HEJdELBPdm

Good morning to all Barca fans. Trust me , this mauling was needed. This humiliation was coming for some time now . Hopefully things pick up from here. Messi deserves a better send-off pic.twitter.com/C2GozKa0Db

Another Year of Lionel Messi Wasted By Barcelona

Another year of Lionel Messi’s career wasted by Barcelona. pic.twitter.com/fu1xOhyLM7

This was also the first time since 2007-08 that Barcelona ends their campaign without a single trophy. The Champions League was their final chance at silverware this season and they return empty-handed. Barcelona were beaten by Real Madrid in the La Liga title race, lost the Spanish Super cup semi-final to Atletico Madrid and were defeated by Athletic Bilbao in the Copa del Rey quarter-finals before this loss.

(The above story first appeared on LatestLY on Aug 15, 2020 10:55 AM IST. For more news and updates on politics, world, sports, entertainment and lifestyle, log on to our website latestly.com).