Veteran Uruguayan striker Luis Suarez has promised to make an imminent decision about his future amid speculation linking him with a move to River Plate. 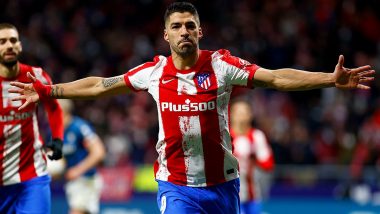 Buenos Aires, July 6 : Veteran Uruguayan striker Luis Suarez has promised to make an imminent decision about his future amid speculation linking him with a move to River Plate. In a conversation streamed on social media, the 35-year-old responded to suggestions that he is in advanced talks with the Argentine giants. "They are saying a lot of things. We'll see. The sooner (it's resolved) the better," Suarez said on Twitch. Lionel Messi, Neymar and Sergio Ramos Return to PSG Training Camp Ahead of Pre-Season Campaign (Watch Video).

Suarez is a free agent after parting ways with Atletico Madrid last month, Xinhua reports. He scored 34 goals in 83 appearances across all competitions for the Spanish club following his 2020 move from Barcelona. The No. 9 has also been linked with Juventus, Atalanta, Inter Miami and Barcelona. River Plate manager Marcelo Gallardo said on Sunday that Suarez and Colombia international striker Miguel Borja were on the club's radar following the departure of Julian Alvarez to Manchester City.

(The above story first appeared on LatestLY on Jul 06, 2022 12:24 PM IST. For more news and updates on politics, world, sports, entertainment and lifestyle, log on to our website latestly.com).