Many fans were happy to see Ibrahimovic return to Old Trafford while some fans were left worried the 39-year-old striker would knock Manchester United out of the tournament. Ibrahimovic left United in 2018 after a knee injury. He moved to LA Galaxy in the United States before returning to AC Milan in December 2019. 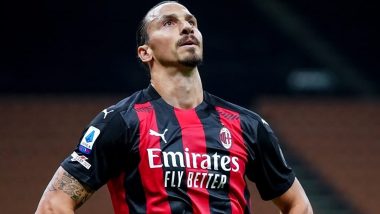 Zlatan Ibrahimovic will return to Old Trafford three years after leaving the club as Manchester United were drawn against AC Milan in the round of 16 in the UEFA Europa League 2020-21. Ibrahimovic established himself as a fan favourite after joining the club as a free agent in 2016. In his two-year spell at the Premier League club, the Swedish striker scored in the Community Shield and League Cup triumphs and also played a key role in the club’s run to the Europa League title. Ibrahimovic scored five goals in 11 matches in the Europa League during that victorious run before an injury in the quarter-final against Anderlecht ruled him out of the remainder of the tournament. UEL 2020-21 Round of 16 Draw: Here's Who Manchester United, Arsenal and Other Teams Will Face in UEFA Europa League Knockouts.

Manchester United vs AC Milan clash in the Europa League last 16 is touted as a blockbuster clash with fans calling the clash of the fallen giants. Both sides have gone without a trophy for the last three seasons. United’s last title was the Europa League win in 2016-17 while AC Milan clinched the Supercopa Italiana trophy in 2016. Since then neither side have managed to lift a title. AC Milan have, in fact, failed to win in Europe since 2007. Twitter reacted as both sides drew each other in the EUL last 16. Take a look at some reactions. Cristiano Ronaldo Shares Lovely Photo With Girlfriend Georgina Rodriguez and His Four Kids, Juventus Star Spends Quality Time With Family.

Manchester United vs AC Milan in Europa League Round of 16

They now meet in the Europa League round of 16 😍 pic.twitter.com/S5MwAnv5EG

United vs AC Milan, we’re into added time and Zlatan is running towards goal with a chance to win it. #UEL

Harry Maguire and Victor Lindelof When They See Ibrahimovic Running

Maguire and lindelof when they see zlatan running at them. pic.twitter.com/ozGxChFSxG

Zlatan to Martial When They Meet in Europa League

Zlatan to Martial when he gets subbed at 60’ for having 0 shots on target #ueldraw pic.twitter.com/ClS6YNPuPA

He is Coming Back!!

Many fans were happy to see Ibrahimovic return to Old Trafford while some fans were left worried the 39-year-old striker would knock the Red Devils out of the tournament. Ibrahimovic left United in 2018 after a knee injury. He moved to LA Galaxy in the United States where it was thought he would wind-up his career but the Swedish striker has since flourished after returning to AC Milan in December 2019.

Both United and AC Milan are second in their respective leagues and favourites to win the Europa League. But only one side can advance into the quarter-finals. The first leg of the last 16 tie will be played at Old Trafford on March 11 followed by the second leg at San Siro a week later.

(The above story first appeared on LatestLY on Feb 26, 2021 08:33 PM IST. For more news and updates on politics, world, sports, entertainment and lifestyle, log on to our website latestly.com).