Manchester United would be keen on returning to winning ways in the Premier League following a shock defeat last weekend and they would once again bank on their highly-rated attack led by Cristiano Ronaldo to win all three points. This match is a tricky game for United gaffer Ole Gunnar Solskjaer but with the kind of team he possesses, they will just about get the job done for him. 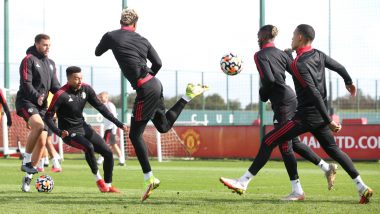 Manchester United take on Everton with an aim to get back to winning ways in the league after a horror show at home saw them lose to Aston Villa last weekend. The Red Devils were far from convincing against Villareal in Europe but managed to get over the line with moments of brilliance from Alex Telles and Cristiano Ronaldo. Ole Gunnar Solskjaer has stressed the importance of building momentum and three points become even more priceless as the international break follows this match. Opponents Everton are one amongst five teams who are just a point below table-toppers Liverpool. The two teams have had some fascinating battles at Old Trafford in the past and this could be no different. Manchester United versus Everton will be telecasted on the Star Sports network and streamed on Hotstar from 5:00 PM IST. Cristiano Ronaldo Reacts After Scoring a Last-Minute Goal for Manchester United Against Villareal in UCL 2021-22

Skipper Harry Maguire has been ruled out of the Everton clash due to a calf problem he picked up against Aston Villa. Luke Shaw has recovered from a muscle problem but the after-effects of an illness may prevent him from taking part in the game. There has been a lot of talk around Donny Van de Beek prior to the match but the Dutchman would be largely ignored in his encounter too with Fred and Paul Pogba being the likely midfield partnership. Cristiano Ronaldo, Bruno Fernandes and Mason Greenwood are automatic starters for the hosts and will have a prominent role to play again.

Richarlison, Dominic Calvert-Lewin, Fabian Delph and Andre Gomes are all ruled out for Everton due to fitness problems. Demarai Gray has been a brilliant signing for the Toffees and could cause problems for the United backline. Allan and Abdoulaye Doucoure could gain a foothold in central midfield where the Red Devils have looked out of sorts.Neymar Jr, Lionel Messi, Kylian Mabppe, Achraf Hakimi & Others React After PSG Wins 2-0 Against Manchester City in UCL 2021-22 Match (Check Reactions)

Tricky game for Ole Gunnar Solskjaer but with the kind of team he possesses, they will just about get the job done for him.

Manchester United vs Everton match in Premier League 2021-22 will be played at the Old Trafford in Manchester. The game will be held on October 02, 2021 (Saturday) and the match is scheduled to begin at 05:00 pm IST (Indian Standard Time).

Where to Get Live Telecast of Manchester United vs Everton, Premier League 2021-22 Football Match?

Fans in India can watch the Manchester United vs Everton match live on Star Sports channels since Star Network is the official broadcaster for the Premier League 2020-21 in India. Fans can tune into Star Sports Select SD/HD channels to live telecast the clash.

How to Get Free Live Streaming of Manchester United vs Everton, Premier League 2021-22 Football Match?

The game will also be available online for live streaming. As Star Network is the official broadcaster for Premier League in India, fans can watch the live streaming of the Manchester United vs Everton match on Disney+Hotstar.

(The above story first appeared on LatestLY on Oct 02, 2021 01:45 PM IST. For more news and updates on politics, world, sports, entertainment and lifestyle, log on to our website latestly.com).