Paul Pogba has returned to training but the French star is unlikely to start. Scott McTominay was brilliant in Paris and could once again be entrusted with the task of stopping Kylian Mabppe. Bruno Fernandes and Donny Van de Beek are the creative sparks in this Manchester United side and Ole Gunnar Solskjaer will be tempted to start with both. 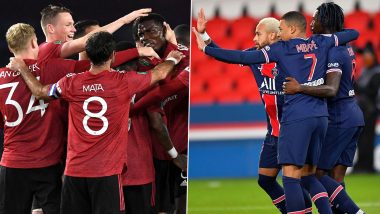 Manchester United vs Paris Saint-Germain, UEFA Champions League 2020-21 Live Telecast and Live Streaming Online in IST: Manchester United have the chance to clinch a round of 16 berth in this season’s UEFA Champions League when it hosts French champions Paris Saint Germain. The Red Devils have been one of the in-form sides in Europe this season, scoring goals for fun and currently lead Group H with 9 points and a relatively superior goal difference. PSG are 3 points behind them but a win at Old Trafford is sure to spice things up. A draw for the home side is enough to secure progress finishing top helps avoid the top clubs in the next round and is an advantage. MUN vs PSG Dream11 Prediction in UEFA Champions League 2020–21: Tips to Pick Best Team for Manchester United vs Paris Saint-Germain Football Match.

Paul Pogba has returned to first-team training but the French star is unlikely to start. Scott McTominay was brilliant in Paris and will once again be entrusted with the task of stopping Kylian Mabppe and co. Bruno Fernandes and Donny Van de Beek are the creative sparks in this Manchester United side and Ole Gunnar Solskjaer will be tempted to start with both. Anthony Martial has not trained much and in his place in the line-up will likely go to Edinson Cavani.

Ander Herrera returns to Old Trafford along with Angel Di Maria to help win three points for PSG. Kylian Mbappe and Neymar were poor in the reverse fixture and this will need to change if the Parisians hope to get a positive result. Juan Bernat, Julian Draxler, Thilo Kehrer, Mauro Icardi and Pablo Sarabia all miss out for the visitors but the returning Marquinhos should add stability in their defensive line.

Manchester United vs Paris Saint-Germain match in UEFA Champions League 2020-21 will be played at Old Trafford Stadium on December 03, 2020 (Wednesday midnight). The match will begin at 01:30 am IST (Indian Standard Time).

Fans in India can live telecast the Manchester United vs Paris Saint-Germain match on Sony Sports channels. Sony Pictures Sports Network (SPSN) is the official broadcaster for UEFA Champions League 2020-21 in India. So Fans can tune into Sony Ten SD and Sony Ten HD channels to catch the live-action of the UCL Group H match.

Those fans unable to follow the match live on television can follow the clash online. SonyLiv, the OTT of Sony Network, will be live streaming the Group H UCL match online for fans in India. Manchester United at home are an unpredictable team but this game has all the makings of a high scoring entertainer.

(The above story first appeared on LatestLY on Dec 02, 2020 05:04 PM IST. For more news and updates on politics, world, sports, entertainment and lifestyle, log on to our website latestly.com).