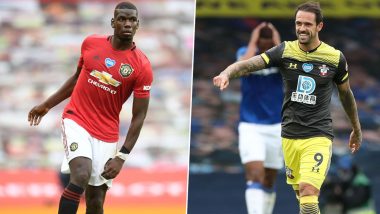 Manchester United will eye a sixth straight win when they host Southampton in Premier League 2019-20 on Sunday. United are unbeaten in their last 17 matches across all competitions and can equal Sir Alex Ferguson’s record of 18 successive wins (2013) with a home victory against Southampton. The visitors are unbeaten in their last three matches, which includes wins over Man City and Watford. They also held Everton to 1-1 draw after going behind and will hope to pull off a favourable result at Old Trafford. Meanwhile, fans searching for all tips and team suggestions pick the best team for the Manchester United vs Southampton clash, please scroll below. Manchester United Becomes First Team in Premier League to Win 4 Consecutive Games by 3 or More Goals.

Ole Gunnar Solskjaer’s side have won each their last four Premier League games by a margin of three goals and scored 17 goals in their last six league matches while conceding only thrice, two of which came against Bournemouth in a 5-2 home win. They have four clean sheets in that period. The home side have no fresh injury concerns with only Phil Jones and Axel Tuanzebe out with long term injuries. Paul Scholes Urges Manchester United to Buy a Pacy Defender to Partner Harry Maguire.

Similarly, Southampton full-back Jannik Vestergaard is expected to be back after recovering from his thigh injury while Moussa Djenepo, Sofiane Boufal and Yan Valery are potentially out for the remainder of the season. the rest of the squad is available to manager Ralph Hasenhuttl.

Manchester United vs Southampton, EPL 2019-20, Dream11 Team Prediction: Defenders – Aaron Wan-Bissaka (MUN) is a must pick for the defenders’ slot. Luke Shaw (MUN) and Southampton’s Ryan Bertrand (SOU) will be the other two defenders.

(The above story first appeared on LatestLY on Jul 13, 2020 02:13 PM IST. For more news and updates on politics, world, sports, entertainment and lifestyle, log on to our website latestly.com).