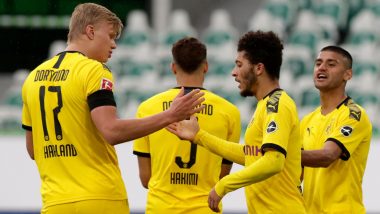 Borussia Dortmund will be eye a comeback when they travel to West Germany to face SC Paderborn in Bundesliga 2019-20. A 0-1 home defeat to defending champions and league leaders Bayern Munich in their last match has put Lucien Favre’s side seven points behind in the league title race. Bayern’s 5-0 rout of Dusseldorf has widened the gap to 10 but Dortmund can pull it back to seven with a win against the bottom-placed Paderborn. Meanwhile, fans searching for all the tips and team suggestions to pick the best team for PDB vs DOR match in Bundesliga 2019-20, should scroll down for all information. Erling Haaland to Miss Upcoming Bundesliga 2019-20 Game Against Paderborn Due to Knee Injury.

Dortmund will miss striker Erling Haaland with a knee problem meaning there will be a reshuffle in the attacking line with Thorgan Hazard starting centrally. Jadon Sancho might make his first start since football resumes post the COVID-19 halt. Midfielder Mahmoud Dahoud all has an injury and is out of contention with Emre Can taking his place in the side having recovered from his own injury. For Paderborn, Klaus Gjasula is suspended due to accumulation of 15 yellow cards while defender Lucas Kilian is doubtful.

SC Paderborn vs Borussia Dortmund, Bundesliga 2019-20, Dream11 Team Prediction: Defenders –Achraf Hakimi (DOR) is a must-pick for the defenders’ role. In this fantasy team, he will be joined with teammate Mats Hummels (DOR) and Christian Strohdiek (PDB).

SC Paderborn vs Borussia Dortmund, Bundesliga 2019-20, Dream11 Team Prediction: Midfielders – Thorgan Hazard (DOR) and Julian Brandt (DOR) have been the best players for Borussia Dortmund in recent times. Kai Proger (PDB) and Emre Can (DOR) will be other two midfielders in the fantasy side.

SC Paderborn vs Borussia Dortmund, Bundesliga 2019-20, Dream11 Team Prediction: Forwards – Jadon Sancho (DOR) will finally make his first start since action resumed in Bundesliga. With Haaland out injured, Sancho will be brought into the starting eleven. He will be joined by Dennis Srbeny (PDB) in a two-man pronged attack.

Julian Brandt (DOR) should be appointed the captain of this fantasy side as he has been best man in-form in recent times. Dortmund teammate Achraf Hakimi (DOR) can be made the vice-captain for this match. Both teams played a thrilling 3-3 draw in their last league meeting this season.

(The above story first appeared on LatestLY on May 31, 2020 02:34 PM IST. For more news and updates on politics, world, sports, entertainment and lifestyle, log on to our website latestly.com).