Peru Squad for 2018 FIFA World Cup in Russia: Lineup, Team Details, Road to Qualification & Players to Watch Out for in Football WC

Peru is placed in Group C of FIFA World Cup 2018 with Australia, Denmark and France. They will begin their world cup campaign against Denmark on June 16 and then next play France on June 21 and Australia on June 26. 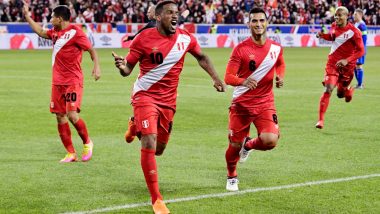 Peru’s first World Cup in 36 years in Russia has been hampered by the ban slapped on their inspirational captain Paolo Guerrero for his involvement in doping. Peru’s record goalscorer had claimed innocence in front of Court of Arbitration for Sport (CAS), but the court in return increased his ban significantly from six months to fourteen months leaving the entire nation fuming. The Peruvian skipper had played an integral part in their qualification to the mega event in Russia, and the squad has been left severely depleted of firepower in his absence. We look at key information on Peru placed in Group C of FIFA World Cup 2018 in Russia, their team lineup, squad news and other significant details. FIFA World Cup 2018 Schedule in IST for PDF Download: Fixtures, Groups, Time Table with Match Timings & Venue Details of Football WC in Russia.

Coach Ricardo Gareca will go with Pedro Gallese as his first-choice goalkeeper, and new captain Alberto Rodriguez who plies his trade in Colombia with Junior FC has his task cut out at the back leading the defense. Christian Ramos and Luis Advincula have been with the national team long enough and should start in Russia although Flamengo’s Miguel Trauco will present a stiff challenge for a starting eleven. 2018 FIFA World Cup Friendlies Fixtures: Check Full Warm-Up Schedule Timetable in Indian Time for Germany, Brazil, Spain, England, Argentina and All 32 Countries.

Yoshimar Yotun is the only experienced name in a Peruvian midfield which is young and will be under the pump in the World Cup. Their tendency to create a play from the back launching long balls in order to bypass the midfield looks best suited to them in Russia too. Ricardo Gareca is taking Andre Carrillo of Watford, Raul Ruidiaz of Mexican side Monarcas and Jefferson Farfan, who plays for FC Lokomotiv Moscow with him as the strikers. Each player possesses different skill set and will get the opportunities to impress the coach in friendlies before the World Cup.

Peru amassed 26 points in the CONMEBOL World Cup qualifiers with seven wins out of eighteen matches played and hence moved to the intercontinental playoffs where New Zealand awaited them. They beat New Zealand 2-0 on aggregate with both goals coming in the second leg in Lima to make it to a first World Cup in 36 years. Edison Flores and Paolo Guerrero were the lead scorers for Peru in the campaign with four goals each.

Peru finished seventh in the CONMEBOL World Cup qualifiers in 2014 and hence did not participate in the World Cup in Brazil.

Jefferson Farfan: The striker was on target for Peru in the playoff win over New Zealand that helped his side make it to the mega event and will be raring to go in Russia. He is often deployed out wide from where he cuts in and scores crucial goals.

Edison Flores: 9 goals in 26 appearances at the age of 24 is not a bad return for a young winger, and now with a World Cup on the horizon, the youngster has the opportunity to become a national icon. He is yet to find feet at the club level though, and a good performance may help him boost his chance of cementing a regular starting eleven spot with his Danish club Aalborg.

Peru is placed in Group C of FIFA World Cup 2018 with Australia, Denmark and France. They will begin their world cup campaign against Denmark on June 16 and then next play France on June 21 and Australia on June 26. Before heading off to Russia for the quadrennial event, Peru will also be playing three friendly matches as a part of warmup preparations - vs. Scotland on May 30, vs. Saudi Arabia on June 3 and vs. Sweden on June 9.

(The above story first appeared on LatestLY on May 28, 2018 04:00 PM IST. For more news and updates on politics, world, sports, entertainment and lifestyle, log on to our website latestly.com).