Poland Squad for 2018 FIFA World Cup in Russia: Lineup, Team Details, Road to Qualification & Players to Watch Out for in Football WC

Poland will take on Senegal in their first match of FIFA World Cup 2018 on June 19. Placed in Group H, they will next be playing Colombia on June 24 and Japan on June 28. 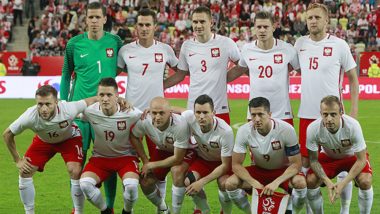 After reaching the quarter-final of the Euro 2016, Poland head to the 2018 FIFA World Cup to continue with their resurgence in football and replicate their successful teams of the 70s and 80s which dominated footballing headlines. The Poles have the probably the best striker in European football in Robert Lewandowski in their squad, but coach Adam Nawalka has brushed aside any hint of Poland being branded as a one-man team. The man issue the Polish side is facing at the moments is with some of the key men only returning to football at the later part of the season due to an injury curtailed season. Let us take a look at Poland team lineup for 2018 FIFA World Cup, their announced world cup squad and other vital news before they fly off to Russia for the quadrennial event. FIFA World Cup 2018 Schedule in IST for PDF Download: Fixtures, Groups, Time Table with Match Timings & Venue Details of Football WC in Russia.

The backbone of the team consists of the pairing of Kamil Glik and Lukasz Piszczek who were supreme in Euro 2016. Two young and much adored central midfielders, Piotr Zielinski and Karol Linetty have cemented their position in the starting eleven and are indispensable to the team. Their solid link-up play has been the key to bringing the stability needed in midfield. The goalkeeping department poses a challenge with Wojciech Szczesny, their regular no 1, spending an entire season as deputy to Gianluigi Buffon at Juventus. 2018 FIFA World Cup Friendlies Fixtures: Check Full Warm-Up Schedule Timetable in Indian Time for Germany, Brazil, Spain, England, Argentina and All 32 Countries.

The striking department is led by Robert Lewandowski, who has had a brilliant campaign with 39 goals for Bayern Munich although he did score just a solitary goal for Poland in Euro 2016. All eyes will be on him in Russia as he is one of the players to watch out for at the World Cup. Arkadiusz Milik is the backup option for Adam Nawalka just in case things are not going well with the forward line and he will look to ease the pressure on Lewa.

Poland finished top of Group E of the European World Cup qualifiers with 25 points. A staggering 8 wins out of 10 matches played ensured automatic progression to the World Cup with Robert Lewandowski scoring 16 goals for Poland in the campaign, the most by a European player.

Poland were off the boil in Group H of the 2014 European World Cup qualifiers and finished with just 13 points hence not making the final 32 of the World Cup in Brazil.

Jakub Blaszczykowski: He is an effortless runner on the pitch for his country, and the Vfl Wolfsburg man knows all about running up and down on the flanks. He has scored 19 times for Poland and will look to get over the set back of missing the crucial penalty in the shootout loss to Portugal at the Euros.

Robert Lewandowski: The go-to man up front, he is under tremendous pressure to perform, and as is the thing with top players, they relish these challenges. He absolutely dismantled the back line of the opposition during the qualifiers and should be on the scorers list for Poland.

Poland will take on Senegal in their first match of FIFA World Cup 2018 on June 19. Placed in Group H, they will next be playing Colombia on June 24 and Japan on June 28. In order to fine-tune their skills, Poland will be playing two international friendlies, the first one being up against Chile on June 9 and vs. Lithuania on June 12.

(The above story first appeared on LatestLY on May 28, 2018 04:17 PM IST. For more news and updates on politics, world, sports, entertainment and lifestyle, log on to our website latestly.com).