RB Leipzig enjoy a 1-0 advantage going into the second leg and would look to make it count to seal a spot in the UEFA Europa League 2021-22 final. Continue reading to get live streaming and telecast details of this match. 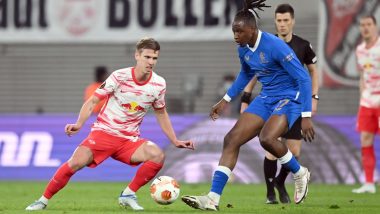 Rangers are set to go up against RB Leipzig in the second leg of the UEFA Europa League 2021-22 semifinals on Friday, May 6. The match will be played at the Ibrox Stadium in Glasgow and is scheduled to begin at 12:30 am IST (Indian Standard Time). The Scottish side would be under pressure heading into this match, having lost the first leg 1-0. Although it might not be that big a deficit, it would be difficult against a side like Leipzig, who have done well in the competition so far. Carlo Ancelotti Reveals Showing Motivational Video to Real Madrid Team Ahead of Their UCL 2021–22 Semifinal Against Manchester City

But their current form has not been great, with them losing two consecutive Bundesliga matches. Rangers, on the other hand, played out a 1-1 draw against rivals Celtics. Let us take a look at the live streaming and telecast details of the match.

The Rangers vs RB Leipzig semifinal clash in the UEFA Europa League 2021-22 will be played at Ibrox Stadium on May 6, 2022 (Friday). The game has a scheduled time of 12:30 am IST (Indian Standard Time).

Where To Watch Live Telecast of Rangers vs RB Leipzig, UEL 2021-22 Semifinal Match on TV?

Sony Pictures Network are the official broadcaster of UEFA Europa League 2021-22 in India and will telecast the games live on its channels. Fans can tune into Sony Sports channels to watch the live telecast of Rangers vs RB Leipzig on TV.

Sony Pictures Network’s official OTT platform Sony Liv will be streaming the game live for its fans in India. You can tune into the Sony Liv app or website to watch Rangers vs RB Leipzig UEFA Europa League 2021-22 live streaming online.

(The above story first appeared on LatestLY on May 05, 2022 09:07 PM IST. For more news and updates on politics, world, sports, entertainment and lifestyle, log on to our website latestly.com).