Real Madrid Transfer News: Zinedine Zidane Set To Step Away At The End Of Season

The Real Madrid manager has communicated with his players that he won’t be continuing past the current season prior to their clash against Sevilla. Zinedine Zidane has made up his mind and will walk away from his post, resigning for the second time having previously quit in 2018. 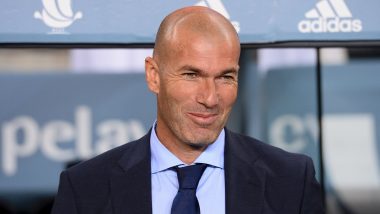 Zinedine Zidane is expected to leave Real Madrid at the end of the season despite if the club manages to secure La Liga glory or not. The Frenchman is in his second spell at the Spanish capital club and is ready to walk away from the final year of his contract having previously managed the Los Blancos from 2016 to 2018, winning three consecutive Champions League titles. Juventus Transfer News Update: Zinedine Zidane In Contention To Replace Andrea Pirlo.

Zinedine Zidane has communicated with his players that he won’t be continuing post the current season prior to their clash against Sevilla, confirmed Goal. The 48-year-old manager has made up his mind and will walk away from his post, resigning for the second time having previously quit in 2018. Zinedine Zidane Denies Reports of On-Ground Spat With Marcelo, Says ‘He Had Some Discomfort’.

Real Madrid are still involved in the La Liga title race and take on Athletic Club and Villarreal in their final two fixtures of the season as they look to overtake rivals Atletico in the league table and win successive league titles for the first time in more than a decade.

Physical and mental fatigue have been mentioned as possible reasons for Zinedine Zidane’s stepping down after he was called upon by Fiorentine Perez towards the end of the 2018-19 campaign when both Julen Lopetegui and Santiago Solari failed to make the desired impact.

Real Madrid have understood to have finalised a three-man shortlist to replace Zinedine Zidane at the helm. Max Allegri, previously of Juventus, tops the desired wishlist and is one of the main men to take over the managerial job. Former player Raul, who currently manages the youth team, is also in contention.

(The above story first appeared on LatestLY on May 16, 2021 09:09 AM IST. For more news and updates on politics, world, sports, entertainment and lifestyle, log on to our website latestly.com).