Liverpool were rocked early on by a devastating injury to Mohamed Salah, which could also leave the Egyptian's World Cup hopes in doubt. 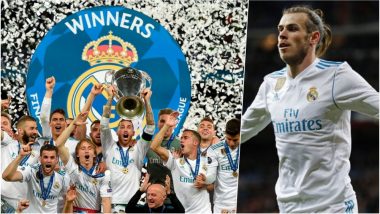 Karim Benzema struck a bizarre opening goal on 51 minutes before Liverpool, who lost leading scorer Mohamed Salah to injury in the first half, replied through Sadio Mane.

Bale replaced Isco on the hour and connected with an outrageous acrobatic effort on 64 minutes to put Real back in front. The Welshman sealed a record-extending 13th European Cup title for Real with seven minutes left as a dreadful mistake from Loris Karius allowed his long-range shot to find the net.

Liverpool were rocked early on by a devastating injury to Mohamed Salah, which could also leave the Egyptian's World Cup hopes in doubt. Salah got tangled up with Madrid's defender Sergio Ramos and the result was a heavy landing on the point of his left shoulder.

The final, however, was a nightmare for Liverpool goalkeeper Loris Karius. He was at fault for Madrid's first goal, when he threw the ball directly onto the foot of Madrid's Karim Benzema, who redirected it in, and also for the third, in the 83rd minute, when he allowed a knuckling long-distance shot by Gareth Bale to slip through.

It is interesting to note that Bale was controversially benched by Zinedine Zidane, and was introduced into the game in the 61st minute, when the scores were leveled at 1-1. The victory was Madrid's third in a row in the tournament, a feat unseen in the competition since Bayern Munich won three consecutive European Cups from 1974 - 1976.

(The above story first appeared on LatestLY on May 27, 2018 10:07 AM IST. For more news and updates on politics, world, sports, entertainment and lifestyle, log on to our website latestly.com).