Real Madrid vs Mallorca, La Liga 2019–20: Eden Hazard, Takefusa Kubo and Others Players to Watch Out in RM vs MLC Football Match 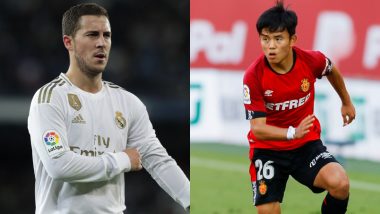 Eden Hazard and Takefusa Kubo Will Be Among the Players to Watch Out (Photo Credits: Getty Images)

Real Madrid will hope to make it four successive wins when they host a relegation battling Mallorca in La Liga 2019-20 on Wednesday. A victory against Vincente Moreno’s side will also help Madrid reclaim their top position in the league points table, where they are currently second three behind Barcelona who beat Athletic Bilbao on Tuesday. Madrid have been in fine fettle since the league resumed after a three-month coronavirus pandemic halt and will be eager to continue the same form against a Mallorca-side, who are winless in their last three games. Real Madrid vs Mallorca Dream11 Prediction in La Liga 2019–20.

Zinedine Zidane will, however, have to tinker his winning side from the Real Sociedad with captain and defender Sergio Ramos doubtful after taking a knock against Sociedad. Casemiro is also out with a suspension after accumulating yellow cards. Eden Hazard could start for them having sat out of the Sociedad game while Marco Asensio is expected to replace James Rodrigues for his first start. Take a look at the key players to watch out for the Real Madrid vs RCD Mallorca La Liga clash. La Liga 2019–20: Sergio Ramos Creates Goal-Scoring History in Real Madrid’s Win Over Real Sociedad.

The Belgian looks to be his old self again after returning to action from a five-month-long injury lay-off. Hazard, who joined Madrid from Chelsea in the summer, has endured a difficult time at the club in his first few months with poor form and injuries disrupting his settling in new surroundings. But post the COVID-19 break, he has looked in fine touch and has already assisted twice in two games. He should be fresh and sitting out of the previous and will be eager to get the first goal since November.

The Frenchman is also back to his best and has already thrice since the restart, including two against Valencia. Benzema is only behind Lionel Messi in the La Liga scoring chart and will be eager to catch the Argentine quickly with a flurry of goals in his next couple of matches. Benzema has 17 goals while Messi has 21.

A former La Masia academy cadet and currently on loan from Real Madrid at Mallorca, Kubo will hope to prove his worth against his parent club and also try and persuade Real coach Zinedine Zidane into making him part of his plans for next season. The Japanese has undoubtedly been Mallorca’s best midfielder since joining them in January. His ball retention, dribbling prowess and key passes will be important if Mallorca are to cause an upset.

(The above story first appeared on LatestLY on Jun 24, 2020 05:39 PM IST. For more news and updates on politics, world, sports, entertainment and lifestyle, log on to our website latestly.com).