Real Madrid are currently in form and are heading into this clash having won their last Champions League clash against Shakhtar Donetsk quite convincingly. They would hope to repeat a similar performance against Shakhtar at home. 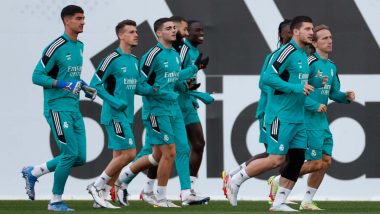 Real Madrid play host to Shakhtar Donetsk in the UEFA Champions League group stage aiming to improve their chances of qualification to the next round. The performance of Group D leaders Sheriff Tiraspol has taken everyone by surprise which has left European giants like Real Madrid and Inter Milan fighting it out for qualification. As things stand, Real Madrid and Sheriff Tiraspol are level on six points with Inter at four. Shakhtar Donetsk looks down and out and they need a win against Real Madrid to have an outside chance to make it to the next round. Although Real Madrid have been inconsistent for some time now, the team still remains one of the favourites to lift the title. Real Madrid versus Shakhtar Donetsk will be telecasted on the Sony Ten Network and streamed on Sony Liv app from 11:15 PM IST. Cristiano Ronaldo Reacts After Scoring for Manchester United in 2–2 Draw Against Atalanta in UEFA Champions League 2021–22 (Check Post)

Rodrygo Goes and Mariano Diaz are ruled out for Real Madrid with fitness issues but the return of Karim Benzema is a massive boost. Gareth Bale and Dani Ceballos are long-term absentees for the hosts and no timeline has been given for their return. Luka Modric, Toni Kroos and Casemiro pick themselves up in midfield. Vinicius Jr is scoring goals for fun at the moment and will be a key player against Shakhtar Donetsk.

Pedrinho, Lassina Traore, and Yevhen Konoplyanka are all ruled out for the visitors as they recover from their respective injuries. Andriy Pyatov will have to use all his experience in goal to thwart the Real Madrid attackers from scoring. Going forward, it is Fernando leading the pack with Tete and Manor Solomon on the wings. Alan Patrick is the one making this side tick from the no 10 slot and could be heavily marked.

Real Madrid should not face any difficulty beating Shakhtar Donetsk which will consolidate their positioning in the group even further.

Real Madrid vs Shakhtar Donetsk clash in UEFA Champions League 2021-22 will be played at the Santiago Bernabeu in Madrid, Spain on November 03, 2021 (Wednesday). The game has a scheduled time of 11:15 pm IST (Indian Standard Time).

Sony Pictures Network are the official broadcasters of UEFA Champions League 2021-22 in India and will telecast the games live on its channels. Fans can tune into Sony Sports HD/SD channels to watch the live telecast of Real Madrid vs Shakhtar Donetsk on TV.

Sony Pictures Network’s official OTT platform Sony LIV will be streaming the game live for its fans in India. You can tune into the Sony Liv app or website to watch Real Madrid vs Shakhtar Donetsk, UEFA Champions League 2021-22 live streaming online. JioTV would also provide live streaming for this match.

(The above story first appeared on LatestLY on Nov 03, 2021 04:14 PM IST. For more news and updates on politics, world, sports, entertainment and lifestyle, log on to our website latestly.com).