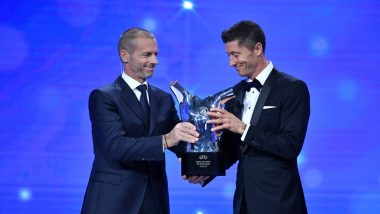 It’s been a night to remember for Bayern Munich player Robert Lewandowski has walked away home with a couple of gongs. First, he was named as the UEFA Forward of the Year but also has been adjudged as the as UEFA Men's Player of the Year 2019-20. Kevin De Bruyne and Manuel Neuer have been nominated along with the Polish stalwart. But in the end, it was Lewa who walked away with the last laugh as he walked away with the Player of the Year Award 2019-20.  Not only the German club but also Lewa had a great time this season. Robert Lewandowski Wins UEFA Forward of the Year 2019-20, Pips Kylian Mbappe & Neymar Jr for the Gong!

Lewa has scored 15 Champions League goals from 10 games. The Polish football stalwart also has five assists to his name. Lewa overall has scored more than 40 goals for the fifth time in his career and he was an obvious choice for the award. Bayern Munich also congratulated him for the gong. the club further labelled him as the best!

(The above story first appeared on LatestLY on Oct 01, 2020 10:20 PM IST. For more news and updates on politics, world, sports, entertainment and lifestyle, log on to our website latestly.com).