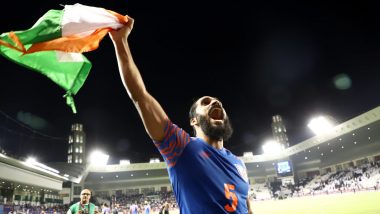 Rumours have been circulating about the defender and his future with many reporting that Jhingan might be on his was to Europe or Qatar. During an Instagram chat hosted by All India Football Federation (AIFF), the 26-year-old revealed that it is his dream to play abroad but gave nothing away about his next destination. AIFF Nominate Sandesh Jhingan and Bala Devi for Arjuna Award.

‘Every Asian kid, not only Indians, dream to play in European leagues, especially in La Liga and EPL. (But) there are certain laws that restrict your movements. There are so many things involved. But yes, if you have the quality, you will make it. Now a lot of kids know that they can make it. A lot of players are coming in from those leagues in India. Going forward we will see a lot of Indians making it to Europe’ he said.

The former Kerala Blasters’ defender also added that he would love to captain his country in the future. ‘To lead India will be the greatest honour. Not everyone can lead India. I genuinely cherish when there are expectations from me. I will be love to be a regular captain. People only think that the man with the armband is only the leader. It is not like that. The 11 players on the pitch have an equal responsibility.’ He continued.

Speaking of Indian football, the country’s top football competitions, I-League and ISL will implement the new ‘3+1’ foreign player rule with the former applying it from the 2020-21 campaign and the Katter from 2021-22 season onwards.

(The above story first appeared on LatestLY on May 30, 2020 10:05 PM IST. For more news and updates on politics, world, sports, entertainment and lifestyle, log on to our website latestly.com).